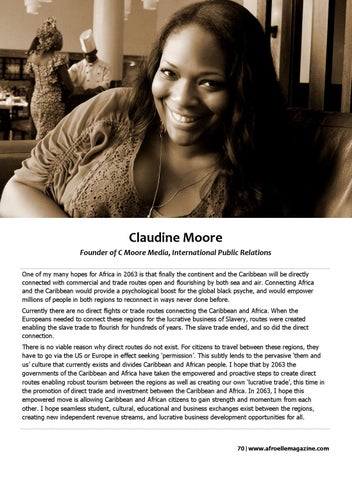 Claudine Moore Founder of C Moore Media, International Public Relations One of my many hopes for Africa in 2063 is that finally the continent and the Caribbean will be directly connected with commercial and trade routes open and flourishing by both sea and air. Connecting Africa and the Caribbean would provide a psychological boost for the global black psyche, and would empower millions of people in both regions to reconnect in ways never done before. Currently there are no direct flights or trade routes connecting the Caribbean and Africa. When the Europeans needed to connect these regions for the lucrative business of Slavery, routes were created enabling the slave trade to flourish for hundreds of years. The slave trade ended, and so did the direct connection. There is no viable reason why direct routes do not exist. For citizens to travel between these regions, they have to go via the US or Europe in effect seeking ‗permission‘. This subtly lends to the pervasive ‗them and us‘ culture that currently exists and divides Caribbean and African people. I hope that by 2063 the governments of the Caribbean and Africa have taken the empowered and proactive steps to create direct routes enabling robust tourism between the regions as well as creating our own ‗lucrative trade‘, this time in the promotion of direct trade and investment between the Caribbean and Africa. In 2063, I hope this empowered move is allowing Caribbean and African citizens to gain strength and momentum from each other. I hope seamless student, cultural, educational and business exchanges exist between the regions, creating new independent revenue streams, and lucrative business development opportunities for all.