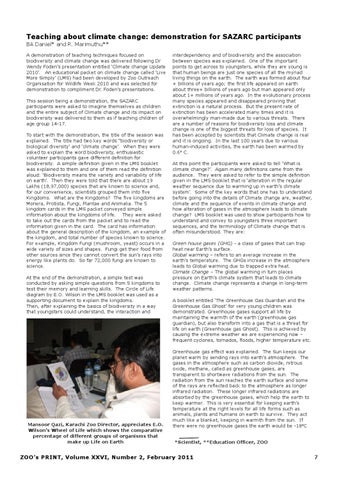 Teaching about climate change: demonstration for SAZARC participants BA Daniel* and R. Marimuthu** A demonstration of teaching techniques focused on biodiversity and climate change was delivered following Dr Wendy Foden’s presentation entitled ‘Climate change Update 2010’. An educational packet on climate change called ‘Live More Simply’ (LMS) had been developed by Zoo Outreach Organisation for Wildlife Week 2010 and was selected for demonstration to compliment Dr. Foden’s presentations. This session being a demonstration, the SAZARC participants were asked to imagine themselves as children and the entire subject of Climate change and its impact on biodiversity was delivered to them as if teaching children of age group 14-17. To start with the demonstration, the title of the session was explained. The title had two key words “biodiversity or biological diversity’ and ‘climate change’. When they were asked to explain the word biodiversity, enthusiastic volunteer participants gave different definition for biodiversity. A simple definition given in the LMS booklet was explained to them and one of them read the definition aloud: ‘Biodiversity means the variety and variability of life on earth’. Then they were told that there are about 19 Lakhs (18,97,000) species that are known to science and, for our convenience, scientists grouped them into five Kingdoms. What are the Kingdoms? The five kingdoms are Monera, Protista, Fungi, Plantae and Animalia. The 5 kingdom cards in the LMS packet conveyed simple information about the kingdoms of life. They were asked to take out the cards from the packet and to read the information given in the card. The card has information about the general description of the kingdom, an example of the kingdom, and total number of species known to science. For example, Kingdom Fungi (mushroom, yeast) occurs in a wide variety of sizes and shapes. Fungi get their food from other sources since they cannot convert the sun’s rays into energy like plants do. So far 72,000 fungi are known to science. At the end of the demonstration, a simple test was conducted by asking simple questions from 5 kingdoms to test their memory and learning skills. The Circle of Life diagram by E.O. Wilson in the LMS booklet was used as a supporting document to explain the kingdoms. Then, after explaining the basics of biodiversity in a way that youngsters could understand, the interaction and

interdependency and of biodiversity and the association between species was explained. One of the important points to get across to youngsters, while they are young is that human beings are just one species of all the myriad living things on the earth. The earth was formed about four + billions of years ago; the first life appeared on earth about three+ billions of years ago but man appeared only about 1+ millions of years ago. In the evolutionary process many species appeared and disappeared proving that extinction is a natural process. But the present rate of extinction has been accelerated many times and it is overwhelmingly man-made due to various threats. There are a number of reasons for biodiversity loss and climate change is one of the biggest threats for loss of species. It has been accepted by scientists that Climate change is real and it is ongoing. In the last 100 years due to various human-induced activities, the earth has been warmed by 0.6o C. At this point the participants were asked to tell ‘What is climate change?’. Again many definitions came from the audience. They were asked to refer to the simple definition given in the LMS booklet that is ‘alteration in the regular weather sequence due to warming up in earth’s climate system’. Some of the key words that one has to understand before going into the details of Climate change are, weather, climate and the sequence of events in climate change and how alteration of gases in the atmosphere leads to climate change? LMS booklet was used to show participants how to understand and convey to youngsters three important sequences, and the terminology of Climate change that is often misunderstood. They are: Green house gases (GHG) - a class of gases that can trap heat near Earth’s surface. Global warming – refers to an average increase in the earth’s temperature. The GHGs increase in the atmosphere leads to Global warming due to trapped extra heat. Climate Change – The global warming in turn places pressure on Earth’s climate system that leads to climate change. Climate change represents a change in long-term weather patterns. A booklet entitled ‘The Greenhouse Gas Guardian and the Greenhouse Gas Ghost’ for very young children was demonstrated. Greenhouse gases support all life by maintaining the warmth of the earth (greenhouse gas guardian), but also transform into a gas that is a threat for life on earth (Greenhouse gas Ghost). This is achieved by causing the extreme weather we are experiencing now – frequent cyclones, tornados, floods, higher temperature etc. Greenhouse gas effect was explained. The Sun keeps our planet warm by sending rays into earth’s atmosphere. The gases in the atmosphere such as carbon dioxide, nitrous oxide, methane, called as greenhouse gases, are transparent to shortwave radiations from the sun. The radiation from the sun reaches the earth surface and some of the rays are reflected back to the atmosphere as longer infrared radiation. These longer infrared radiations are absorbed by the greenhouse gases, which help the earth to keep warmer. This is very essential for keeping earth’s temperature at the right levels for all life forms such as animals, plants and humans on earth to survive. They act much like a blanket, keeping in warmth from the sun. If there were no greenhouse gases the earth would be -18oC *Scientist, **Education Officer, ZOO

If the Big Boss is such a good sport to wear global warming spectacles, everybody should wear them

In what way does climate change affect species? Changes in species distribution ranges, loss of habitat, death of species due to increased stress etc. are some impacts of climate change on species. The present cause of Climate change is man made. Excess use and over-exploitation of natural resources through industrialization, land use pattern, deforestation, large scale farming of domesticated animals, etc .are the main causes of global warming that leads to climate change. Now we see enhanced Greenhouse gas effect and global warming. Towards the end of the session participants were asked to take out the booklet ‘what you can do to live simply’. The best approach is to ‘Live More Simply’. Mahatama Gandi advocated living simply before the concepts of Loss of biodiversity and Climate change even came about. It is not hard to guess what might have been the beginning of what we only now admit has been an orgy of consumption, of overuse of all our natural resources, animals, vegetables, and everybody minerals. At the end of the session all participants were asked to wear ‘global warming’ spectacles and participant in a “march” through the conference hall while chanting slogans advocating living more simply.

Participants joined a mock “march” while wearing their global warming glasses, their red cross arm bands and carrying their small placards. Hopefully some of them will organise programmes on climate change for school children visiting their zoo

This session being a demonstration, the SAZARC participants were asked to imagine themselves as children and the entire subject of Climate change and its impact on biodiversity was delivered to them as if teaching children of age group 14-17. *Scientist, **Education Officer, ZOO 7