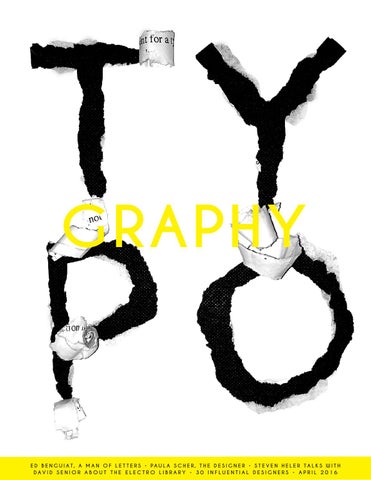 FA U X PA S AVOID BAD PUNCTUATION AND TYPE-CRIMES AT YOUR NEW JOB, WHO NEEDS THAT TYPE OF ATTENTION?

PAIR YOUR FONTS WITH THOUGHT

UNDERLINING TITLES INSTEAD OF ITALICIZING THEM.

HEROES He is also known for his designs or redesigns of these logotypes: •

American’s most prolific typographer and lettering artist. Benguiat has crafted over 600 typeface designs, here are just a few of his gems:

Ed received the usual education. During World War II, he wasn’t old enough to enter the armed service, so with a forged photostat of his birth certificate, he enlisted in the Army. After his stint in the Air Corps he traded his airplane control stick for drumsticks and continued the burgeoning percussionist career he had started before the war. Ed became established as a talented progressive Jazz musician under the name Eddie Benart, and played with numerous big bands such as Stan Kenton, Claude Thornhill and Woody Herman, but preferred the New York gigs on 52nd Street, particularly at The Three Deuces. “It kept me in town; going on the road with big bands was a drag, and tough.” During that time a Metronome magazine poll picked Ed as the number three sideman/drummer in America. At the School of Visual Arts—where about thirty years ago Silas Rhodes gave him a job—Ed compares graphic design and typography to the rhythm and balance of a musical composition. While playing on 52nd Street, Ed made use of the G.I. Bill and enrolled at the Workshop School of Advertising Art. He wanted to draw nudes like some of the well-known illustrators. His drawing teacher advised him to quit. Benguiat persisted. His first job as an illustrator was as a cleavage retoucher for a movie magazine. “You might think I was adding to the bust. No way! I was taking the cleavage away,” he said, indicating the reaction of the motion picture industry to the crackdown on obscenity in movies. It was obvious that Ed couldn’t draw too well, so he went in the direction of layout, design, typography, and calligraphy. He became Paul Standard’s prodigy. Once out of school, Ed established an impressive career as a designer and art director at a number of large and small publishing houses, studios, and ad agencies. Opening his own firm did not take too long. Enter Photo-Lettering Inc. and Ed Ronthaler. They saved Ed’s life financially by making him art director. One way or another, just about everyone in the graphic community has had some contact with Ed. He’s a neighborhood guy. Admittedly, most know him as the guy who sat in his cramped, cluttered office on 45th Street that had just enough room to swing his pen or brush. Benguiat’s impact on the type community involves more than just design. He played a critical role in establishing The International Typeface Corporation, the first independent licensing company for type designers. Ed and ITC jumpstarted the type industry in the late ’60s and early ’70s. Founded in 1971 by http://adcglobal.org/hall-of-fame/edward-benguiat/

For more than three decades Paula Scher has been at the forefront of graphic design. Iconic, smart and unabashedly populist, her images have entered into the American vernacular. Scher has been a principal in the New York office of the distinguished international design consultancy Pentagram since 1991. She began her career as an art director in the 1970s and early &#39;80s, when her eclectic approach to typography became highly influential. In the mid-1990s her landmark identity for The Public Theater fused high and low into a wholly new symbology for cultural institutions, and her recent architectural collaborations have re-imagined the urban landscape as a dynamic environment of dimensional graphic design. Her graphic identities for Citibank and Tiffany &amp; Co. have become case studies for the contemporary regeneration of classic American brands. Scher has developed identities, packaging for a broad range of clients that includes, among others, The New York Times Magazine, Perry Ellis, Bloomberg, Target, Jazz at Lincoln Center, the Detroit Symphony Orchestra, the New Jersey Performing Arts Center, the New 42nd Street, the New

York Botanical Garden, and The Daily Show With Jon Stewart. In 1996 Scher&#39;s widely imitated identity for the Public Theater won the coveted Beacon Award for integrated corporate design strategy. She serves on the board of The Public Theater, and is a frequent design contributor to The New York Times, GQ and other publications. In 1998 Scher was named to the Art Directors Club Hall of Fame, and in 2000 she received the prestigious Chrysler Award for Innovation in Design. She has served on the national board of AIGA and was president of its New York chapter from 1998 to 2000. In 2001 she received the profession&#39;s highest honor, the AIGA Medal, in recognition of her distinguished achievements and contributions to the field. She is a member of the Alliance Graphique Internationale. Her work is represented

in the permanent collections of the Museum of Modern Art and the CooperHewitt National Design Museum, New York; the Library of Congress, Washington, D.C.; the Museum für Gestaltung Zürich; the Denver Art Museum; and the Bibliothèque nationale de France and the Centre Georges Pompidou, Paris. Scher holds a BFA from the Tyler School of Art and a Doctor of Fine Arts Honoris Causa from the Corcoran College of Art and Design. She has lectured and exhibited all over the world, and her teaching career includes over two decades at the School of Visual Arts, along with positions at the Cooper Union, Yale University and the Tyler School of Art. She has authored numerous articles on design-related subjects for the AIGA Journal of Graphic Design, PRINT, Graphis and other publications, and in 2002 Princeton Architectural Press published her career monograph Make It Bigger. http://www.aiga.org/medalist-paulascher/

“As a child, I failed at everything but art. First, I was too scrawny; then I was too fat; my hair was never right; and I was never popular. But as the school artist, I was okay: that was the first place where I felt like I actually belonged.” Paula Scher has been a graphic designer for four decades, spending nearly half that time as a partner at Pentagram’s New York office. She has worked with an impressive roster of big-name clients in every sector from commerce to culture, attracting particular acclaim for her large-scale environmental graphics on urban buildings (see Eye 67) and her landmark series of typographic posters for the Public Theater in New York, which changed the look and feel of theatre promotion in the city in the late 1990s. Born in 1948 in Virginia, Scher grew up in Philadelphia and Washington DC and studied design at Tyler School of Art before moving to New York City in 1970. Her father, who worked for the United States

Geological Survey as a photogrammetric engineer, invented a device that corrects the distortion caused by aerial photography, which prompted her passion for creating hand-painted maps. The first part of her career was spent in the record business as an in-house art director for CBS Records (designing covers for Eric Gale, the typographic ‘Best of Jazz’ series and Boston’s 6m-selling debut) and Atlantic Records – experiences that engendered a longstanding fascination for the way design is managed within large organisations, and the power structures that determine how design gets commissioned and completed. In 1984 she co-founded Koppel &amp; Scher with designer Terry Koppel. Their work included book covers, Swatch watches, the Mondrian-influenced identity for Bruce Lundvall’s Manhattan Records and promotional items such as Great Beginnings and Beautiful Faces. http://www.eyemagazine.com/feature/article/reputations-paula-scher 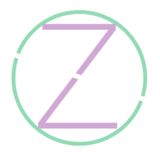