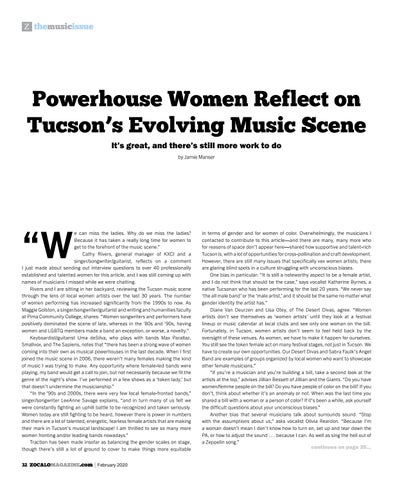 e can miss the ladies. Why do we miss the ladies? Because it has taken a really long time for women to get to the forefront of the music scene.” Cathy Rivers, general manager of KXCI and a singer/songwriter/guitarist, reflects on a comment I just made about sending out interview questions to over 40 professionally established and talented women for this article, and I was still coming up with names of musicians I missed while we were chatting. Rivers and I are sitting in her backyard, reviewing the Tucson music scene through the lens of local women artists over the last 30 years. The number of women performing has increased significantly from the 1990s to now. As Maggie Golston, a singer/songwriter/guitarist and writing and humanities faculty at Pima Community College, shares: “Women songwriters and performers have positively dominated the scene of late, whereas in the ’80s and ’90s, having women and LGBTQ members made a band an exception, or worse, a novelty.” Keyboardist/guitarist Uma deSilva, who plays with bands Max Parallaz, Smallvox, and The Sapiens, notes that “there has been a strong wave of women coming into their own as musical powerhouses in the last decade. When I first joined the music scene in 2006, there weren’t many females making the kind of music I was trying to make. Any opportunity where female-led bands were playing, my band would get a call to join, but not necessarily because we fit the genre of the night’s show. I’ve performed in a few shows as a ‘token lady,’ but that doesn’t undermine the musicianship.” “In the ’90s and 2000s, there were very few local female-fronted bands,” singer/songwriter LeeAnne Savage explains, “and in turn many of us felt we were constantly fighting an uphill battle to be recognized and taken seriously. Women today are still fighting to be heard, however there is power in numbers and there are a lot of talented, energetic, fearless female artists that are making their mark in Tucson’s musical landscape! I am thrilled to see so many more women fronting and/or leading bands nowadays.” Traction has been made insofar as balancing the gender scales on stage, though there’s still a lot of ground to cover to make things more equitable 32 ZOCALOMAGAZINE.com|February 2020

in terms of gender and for women of color. Overwhelmingly, the musicians I contacted to contribute to this article—and there are many, many more who for reasons of space don’t appear here—shared how supportive and talent-rich Tucson is, with a lot of opportunities for cross-pollination and craft development. However, there are still many issues that specifically vex women artists; there are glaring blind spots in a culture struggling with unconscious biases. One bias in particular: “It is still a noteworthy aspect to be a female artist, and I do not think that should be the case,” says vocalist Katherine Byrnes, a native Tucsonan who has been performing for the last 20 years. “We never say ‘the all male band’ or the ‘male artist,’ and it should be the same no matter what gender identity the artist has.” Diane Van Deurzen and Lisa Otey, of The Desert Divas, agree. “Women artists don’t see themselves as ‘women artists’ until they look at a festival lineup or music calendar at local clubs and see only one woman on the bill. Fortunately, in Tucson, women artists don’t seem to feel held back by the oversight of these venues. As women, we have to make it happen for ourselves. You still see the token female act on many festival stages, not just in Tucson. We have to create our own opportunities. Our Desert Divas and Sabra Faulk’s Angel Band are examples of groups organized by local women who want to showcase other female musicians.” “If you’re a musician and you’re building a bill, take a second look at the artists at the top,” advises Jillian Bessett of Jillian and the Giants. “Do you have women/femme people on the bill? Do you have people of color on the bill? If you don’t, think about whether it’s an anomaly or not. When was the last time you shared a bill with a woman or a person of color? If it’s been a while, ask yourself the difficult questions about your unconscious biases.” Another bias that several musicians talk about surrounds sound. “Stop with the assumptions about us,” asks vocalist Olivia Reardon. “Because I’m a woman doesn’t mean I don’t know how to turn on, set up and tear down the PA, or how to adjust the sound . . . because I can. As well as sing the hell out of a Zeppelin song.” 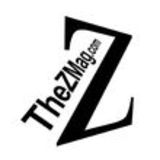