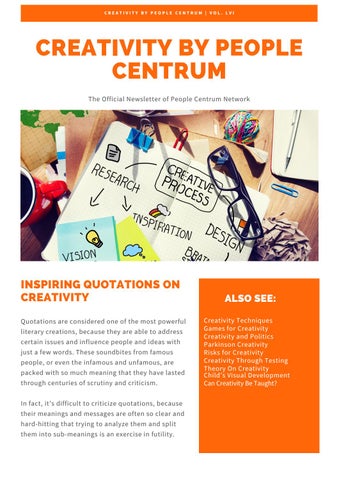 INSPIRING QUOTATIONS ON CREATIVITY Quotations are considered one of the most powerful literary creations, because they are able to address certain issues and influence people and ideas with just a few words. These soundbites from famous people, or even the infamous and unfamous, are packed with so much meaning that they have lasted through centuries of scrutiny and criticism. In fact, it’s difficult to criticize quotations, because their meanings and messages are often so clear and hard-hitting that trying to analyze them and split them into sub-meanings is an exercise in futility.

Below are some of the more popular quotations on creativity. Read on and enjoy. Duke Ellington: “A problem is a chance for you to do your best.” Leonardo da Vinci: “Go some distance away because the work appears smaller and more of it can be taken in at a glance, and a lack of harmony or proportion is rapidly seen.” Ortega Y Gassett: “The metaphor is probably the most fertile power possessed by man.”

Albert Einstein: “Problems cannot be solved by thinking within the framework in which the problems were created.” Jonathan Miller: “Since finding out what something is is largely a matter of discovering what it is like, the most impressive contribution to the growth of intelligibility has been made by the application of suggestive metaphors.” Haridas Chaudhuri: “The greater the emphasis on perfection the further it recedes.” Kierkegaard Soren: “Backwards understood be only can but, forwards lived be must life.” Arie de Geus: “The ability to learn faster than the competition is often the only sustainable competitive advantage a company can have.” Lauren Bacall: “Standing still is the fastest way of moving backwards in a rapidly changing world. Imagination is the highest kite one can fly.” Charles Darwin: “In the long history of humankind (and animalhood, too) those who learned to collaborate and improvise most effectively have prevailed.” Theodore Levitt: “Just as energy is the basis of life itself, and ideas the source of innovation, so is innovation the vital spark of all human change, improvement and progress.” Alfred North Whitehead: “The ‘silly’ question is the first intimation of some totally new development.” Albert Einstein: “If at first, the idea is not absurd, there is no hope for it.” Michael Porter, Harvard Business School: “Innovation is the central issue in economic prosperity.” Peter F Drucker: “Whenever you see a successful business someone once made a courageous decision.” Buckminster Fuller: “There is no such thing as a failed experiment, only experiments with unexpected outcomes.” Esa Saarinen: “The opposite of creativity is cynicism.” Marian Anderson: “As long as you keep a person down, some part of you has to be down there to hold him down, so it means you cannot soar as you otherwise might.” George Bernard Shaw: “You see things and say ‘Why’. But I dream things that never are and say ‘Why not?'” Hugh Prather: “Some people will like me and some won’t. So I might as well be myself, and then at leaswt I know that the people who like me, like me.” J.S. Brown: “Instead of pouring knowledge into people’s heads, we need to help them grind a new set of glasses so that we can see the world in a new way.”

Christopher Logue: “Come to the edge. We might fall. Come to edge. It’s too high! Come to edge! And they came, and he pushed… and they flew.” Raymond Kurzweil: “Launching a breakthrough idea is like shooting skeet. People need change, so you must aim well ahead of the target to hit it.” Julius Hare: “Half of the failures in life arise from pulling on one’s horse as it is leaping.” Albert Szent Gyorgi: “Discovery consists of looking at the same thing as everyone else and thinking something different.” Walt Disney: “If you can dream it, you can do it.” 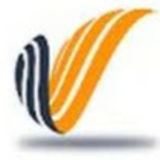 Visit our website below to read more about creativity: https://creativity.peoplecentrum.com/inspiring-quotations-on-creativity/

Visit our website below to read more about creativity: https://creativity.peoplecentrum.com/inspiring-quotations-on-creativity/