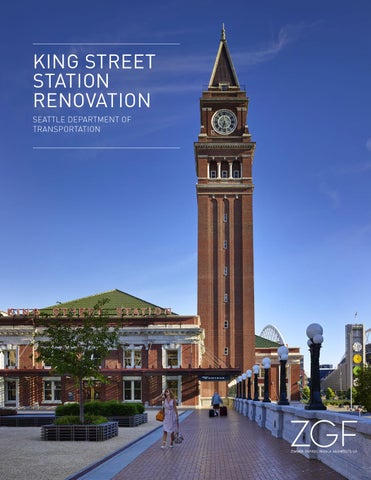 OVERVIEW HISTORIC LANDMARK & ICONIC GATEWAY King Street Station first opened to the public in May 1906 to much fanfare having been designed by Reed and Stem, the architectural firm responsible for New York City’s Grand Central Terminal. The clock tower was modeled after the grand Campanile di San Marco in Venice, Italy. In 1973 the building was placed on the National Register of Historic Places. With the demise of train travel in the early to mid 20th century and lack of funding, the station fell into disrepair. In more recent years the station has seen commute ridership on the rise. In March 2008, the City of Seattle purchased the landmark building from Burlington Northern Railway Company for $10.00. In 2010, the design team began working with the Seattle Department of Transportation (SDOT), the community and its transportation partners to restore King Street Station to its former prominence and re-establish the station as an active transportation hub. The rehabilitation of King Street Station preserves and restores the original character of 62,400 SF station and strengthens its role as a regional transportation hub and important civic landmark at the nexus of several historic neighborhoods in the midst of an urban renaissance. Core elements of the project include the rehabilitation of the iconic 12-story, 6,400 SF clock tower and repair and restoration of the original 45-foot-high ornamental plaster ceilings and

halls, terrazzo and mosaic tile floors and operable windows. The project also included significant upgrades to all structural, electrical, mechanical, plumbing and fire protection systems. The rehabilitation creates 30,000 SF of mixed-use leasable space on the second and third floors prepared to a “core and shell” state. The previously closed-off space will appeal to tenants who want to be at the hub of a historic and sustainable transitoriented urban center. A sustainable investment in Seattle’s future, energy models predict the building will perform 56% better than ASHRAE baseline. The project achieved LEED Platinum certification.

DIGNIFIED ENTRY TO THE CITY AND REGION REESTABLISHING A GRAND PORTAL Echoing the sense of arrival passengers felt when the station opened in 1906, the investment in restoring the station celebrates the importance of passengers, their experience to the railroad and their arrival in Seattle as a passage to the Northwest. The rehabilitation renews dignity and pride in the portal to Seattle and the Pacific region, which was diminished as the station was allowed to deteriorate. Today, the finishes have been restored to dazzle visitors with the charm of the original waiting hall.

ABOVE COURTESY OF University of Washington Libraries, Special

RESTORING HISTORIC GRANDEUR When the station opened in 1906, the grand waiting hall had ornamental plaster ceilings. The plaster walls were interspersed with fluted Corinthian columns. The lower part of the walls and columns were clad in white marble accented with glass mosaic tiles in white, green, red and gold. A massive bronze chandelier hung in the center of the main waiting hall. Along with four smaller chandeliers and wall sconces, they provided illumination for the passengers inside the station. The original terrazzo floors were inlaid with square mosaic tiles, creating a compass shaped pattern at the station entrance and other rectangular patterns throughout the waiting hall.

Vertical Plaster Work The design team located carrara marble that was a near match to the originalâ&#x20AC;&#x201D;believed to come from Alaska, but no longer available. The mosaic band of green, gold and red tiles was restored using glass tile sourced from Murano, Italy.

Plaster Cast On-Site Using the buildingâ&#x20AC;&#x2122;s original ornate pieces and historic methods, craftsmen created matching molds to cast new and repair original sections of the ornamental plaster. Using the first generation mold, the mold was filled with casting plaster and inlaid with hemp and burlap during the casting process to crease the final piece. The casting was then stripped out of the mold, reinstalled and attached to the structure. Extensive as-builting, layout and coordination ensured that all plaster elements were returned to the exact historic location as upgrades were completed.

Ornate Plaster Ceilings â&#x20AC;&#x153;Modernizationâ&#x20AC;? efforts in the 1940s, 50s and 60s removed the plaster and marble walls, glass mosaic tiles and covered the plaster ceiling with acoustical tiles. After being hidden for decades behind the suspended tiles, the ornate plaster ceiling in the 8,000 SF main waiting hall was repaired and restored to prominence.

Condition prior to restoration.

SEISMIC AND STRUCTURAL UPGRADES Half of the budget for the project went toward significant seismic and structural updates to improve the buildingâ&#x20AC;&#x2122;s safety, durability and longevity. Structural support elements required careful insertion behind existing historic finishes. 1,345 tons of steel was installed to support the interior spaces. Located in a liquefaction zone, the station was originally constructed as a steel-framed unreinforced masonry structure. The seismic retrofit required a new steel structure to be constructed inside the old to anchor the existing unreinforced masonry of the new structure. Using performance-based building design, the team analyzed seismic upgrades to ensure the new structural steel fit behind the existing finishes. In order to keep all of the historic elements in the main waiting hall in their historical plane, 35-foot high slots were cut within the buildingâ&#x20AC;&#x2122;s brick perimeter for steel to be inserted and high-strength grouted for seismic reinforcing. Strategically designing the steel allowed the team to increase structural capacity of the building while maintaining the historic fabric required by the project goals and preservation guidelines.

ENHANCING PUBLIC SPACES & COMMUNITY CONNECTIONS Positioned at the nexus of two historic neighborhoods —Pioneer Square and the International District—and sited at the gateway to Seattle’s Stadium Entertainment District, the rehabilitation strengthens the station’s role as a regional transportation hub and neighborhood link. The project improves pedestrian and multi-modal connections in and around the station and has served as a catalyst for additional redevelopment within the neighborhood. Future phases of the project will accommodate the addition of a streetcar, light rail transit and high speed rail.

IMPROVING ACCESS King Street Station is part of the largest transportation hub west of Chicago and north of San Francisco. With over 40 percent of commuters arriving in Seattle using public transportation, the rehabilitation has improved wayfinding and access to the Amtrak ticketing area.

Grand Stairway Restored In the 1960s, the exterior stairway connecting Jackson Street with the lower level of the station was boarded up and an escalator was installed. The rehabilitation reopens the stairway to provide a new pedestrian link.

Reclaimed Granite While installing new utilities and geothermal wells, the team came across granite boulders from an adjacent buildingâ&#x20AC;&#x2122;s old foundation. The foundation granite was a perfect match for the exterior granite originally used for the balustrade and removed during previous installation of the escalator. Using the same means and methods used to create the original granite blocks one hundred years ago, the reclaimed granite boulders were cut and fabricated into new wall panels for exterior finishes.

Seattle Department of Transportation OPPOSITE PAGE ABOVE PHOTOGRAPHER Benjamin Benschneider

Iconic Roof Tiles As part of phase 1, the same green-glazed terra cotta tile roofing was installed. The tile was sourced from the same company that had supplied the original tile.

Simplifying Arrival and Departure The central access to and from the station is a combined entry for buses, cars, pedestrians and cyclists. Pedestrians walking to the station represent the highest mode of access for patrons. The rehabilitation separates pedestrians and cyclists from vehicular traffic to the greatest extent possible given the constraints of the site. Improvements along the west-side of the building include a larger sidewalk as well as a canopy, improving the arrival and departure experience for visitors.

SECURING THE STATION FOR THE FUTURE The rehabilitation brings the facility up to modern codes and standards with significant seismic and structural updates to improve the building’s safety and durability— complying with the City of Seattle’s sustainable building standards and the Secretary of the Interior’s Standard and Guidelines for Historic Preservation. Reinforcing the presence and long-term viability of an established historic landmark and transportation pioneer not only ensures the mobility of the region for future generations, but also underscores the importance of preserving history and greening existing building stock. Efforts to stabilize and prepare the station for another one hundred years celebrates the City of Seattle’s commitment to sustainable infrastructure.

SUSTAINABLE PRESERVATION The project links historic preservation and sustainable strategies by capitalizing on materials and energy invested a century ago. Sustainable features of the LEED Platinum certified station include installation of natural ventilation; replacing all mechanical systems with a ground-source heat pump to cover 100% of the buildingâ&#x20AC;&#x2122;s heating and cooling needs and using energyand water-efficient fixtures. Energy models predict that the building can perform 56.4% better than ASHRAE 2007 and meet benchmarks of the Architecture 2030 Challenge.

GEOTHERMAL WELL FIELD The Jackson Street Plaza area was removed, though perimeter walls were left in place due to preservation requirements, while the plaza structure was re-built to seismic codes. The design team took advantage of the work on Jackson Street Plaza to install 68 wells under the plaza and building which are anticipated to meet 100% of the buildingâ&#x20AC;&#x2122;s heating and cooling requirements.

Geothermal well-field work beneath the plaza, 2010.

View of the station from the southeast. 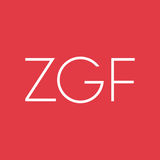