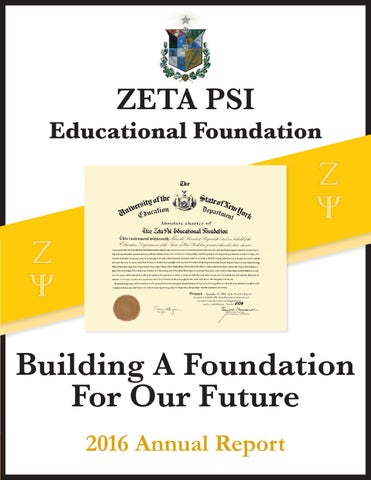 WELCOME Dear Zetes: Welcome to our newest publication, The Zeta Psi Educational Foundation’s Annual Report. Following a thorough review of all of our communications efforts – The Circle of Zeta Psi, UpZete emails, the website www.zetapsi. org, Facebook and LinkedIn – we concluded that all were mostly focused on Zeta Psi Fraternity and the operations of our chapters at 53 different schools. That is certainly consistent with Brother William Comstock’s vision when the first Circle of Zeta Psi was published in 1905. However, another legacy of Brother Comstock’s vision is The Zeta Psi Educational Foundation. Chartered in 1944, our Educational Foundation is a 501(c)3 charity providing educational programs, leadership training and scholarships. This annual report will focus on the activities of The Foundation and its future direction. This annual report will recognize the hundreds of financial donors who support the Foundation each year. Additionally, we honor those with substantial bequests from their estates. The gifts range in size, but all contribute to our mission and add tremendous value to the college experience for our undergraduate Zetes. Thank you! We hope you will find this report informative. We welcome your comments and suggestions. All the best in Tau Kappa Phi, Les Mann President, Zeta Psi Educational Foundation Phi Alpha, Zeta Psi Fraternity

SCHOLARSHIP Since its inception in 1944, The Zeta Psi Educational Foundation has awarded scholarships to deserving recipients that attend college in the United States. In the past year, the Foundation awarded $40,000 in general scholarships and an additional $25,000 in chapter specific funds. Last year, The Foundation awarded 64 scholarships to applicants that ranged from $250 to $1,000. With the ever-increasing cost of college tuition, these scholarships provide much-needed financial support to students who demonstrate financial need. Applications are due each winter and fall and can be found on the Zeta Psi website. The scholarship is awarded based on academic success, leadership, involvement on campus and in Zeta Psi and financial need. The Scholarship Committee, under the leadership of Clay Alberts, Texas ‘02, reviews all completed applications each year. Alumni that would care to volunteer time to participate in the review are welcome to reach out to the Executive Director.

The Scholarship Committee has recently seen a significant increase in applications and has only been able to award scholarships to approximately 50% of the applicants in the past year. The Committee awards some scholarships from special chapter-specific funds, but the majority are unrestricted gifts. The unrestricted gifts come directly from the Foundation’s operating budget. Therefore, we are reliant on our annual fund donors – both large and small – to help our brothers financially when they need it most.

Cost of LTI registration, travel, and lodging to active members

During the 2015-16 academic year, The Zeta Psi Educational Foundation provided extensive membership development training to its undergraduate members and reached more of this population than in any prior year. Between September 2015 and April 2016, The Regional Leadership Training Institute reached 677 members through 11 events that spanned three countries. This continues the positive four-year trend for the program...setting new records – both in total attendance and average number of attendees per event – while continuing to expand the content offered and its delivery methods. As the program continues to evolve, the end product is consistently improving in terms of planning, attendance and presentation.

The 2015-16 regional LTI schedule consisted of 11 LTIs across three countries. A total of 677 active brothers from 45 active chapters and colonies attended a regional LTI this year. LTI events this year had an average attendance of 62 brothers, the highest mark on record for the LTI program. The year’s end marked the third consecutive year of sustained growth for the program, which has now seen over an 85% increase total attendance from the arein 20% 2012-13 academic year. Less likely to be

In terms of budget, the 2015-16 regional LTI program spent $32,401.30 – well under the $36,000 allotted. This figure is also down $1,759.96 from last year’s regional LTI cost. While the two LTIs serving eastern Canadian chapters still came in over budget, these numbers came in closer to budget than in years past and have been offset by savings elsewhere.

are 20% by were represented

graduatesare report that their 20% current employment is in MORE LIKELY lineTO with their preferred HOLD FULL-TIME post-graduate path EMPLOYMENT.

MORE LIKELY a population of 10 TO HOLD FULL-TIME be employed full time 6 would EMPLOYMENT. compared to national average 2 would be in graduate studies 1 would be employed part time 1 would be unemployed

Less likely to be seeking employment

Less likely to be seeking employment

In addition to the regional LTI program, The Risk Management 101 Program saw 828 members complete the course, including each of the current chapter presidents. Since the inception of the e-learning course, 98.5% of Zeta Psiâ&amp;#x20AC;&amp;#x2122;s new initiates have successfully completed the program. For the 2016-17 academic year, the LTI program continues its four-year growth pattern by increasing attendance figures wellPsi as working to ensure that each LTI is financially 2014 as Zeta viable. The largest and most problematic expenditure for the LTI program continues to be the Graduate Profile eastern Canadian chapters, which attend LTI sessions in larger numbers than their American If Zete graduates counterparts. Between 2013 and 2015, Canadian chapters accounted for 39% of regional LTI were represented by expenditures, despite being funded entirely by American donors. Additionally, on-site behavior a population of 10 has been a recurring issue for some of these chapters. These two issues have led staff to propose would be employed full time a change in the 2016-176 Canadian LTI, which would have attendees from these chapters find graduate studiesfor a higher-end LTI venue and experience. This and fund their own lodging 2 would inbe inexchange experimental LTI format would both part save be employed timemoney for the program in 2016-17 and allow the 1 would foundation to explore alternative ways to deliver regional LTIs as we move forward.

The Campaign for Zeta Psi:

Building Strong and Honorable Leaders The Zeta Psi Educational Foundation has launched an ambitious capital campaign to raise $3,500,000. We believe that our future depends on our ability to help create responsible and ethical elder and active chapter leaders.

“ We know we can literally change lives and help Zetes have an advantage in college and in life after they graduate. This campaign helps us deliver on that goal!”

Through our Leadership Training Institute (LTI) Programs we help young men reach their full potential. One of the primary goals of this campaign is designed to permanently endow our Director of Membership Education position. The future of Zeta Psi’s state-of-the-art membership development programming and other educational programs will be secured through the continued success of the Campaign for Zeta Psi.

In addition, several chapters have started funds for their own charitable purposes. Every chapter in the United States can participate with a designated fund that can be used to support educational grants and scholarships. A chapter grant can make a material difference in the life of an undergraduate student. An educational chapter grant can also make a substantial difference in the lives of every resident in the chapter. Campaign pledges may be paid over a five-year period and are directed to programming that is suggested and/or preferred by the donor.

Please help us reach our goal 6

Student interests come and go. Fun, games and fads can sometimes educate young men and women about various aspects of life, but Greek life and all it offers root a student immediately, profoundly and permanently. How does the past – the heritage that we Zetes work to hold onto – inspire, reassure and propel us forward? It is imperative that we bolster and build upon our historical resources so that Zetes can learn about, understand and respect our past. The elders of Zeta Psi have an obligation to our past and it is necessary to carry it forward.

On June 12, 2016, Zeta Psi celebrated the opening and dedication of the James J. Ljunglin Education Center at our International Headquarters in Pearl River, NY. All Zetes may now visit our IHQ and have access to our historical records and artifacts, thanks to the generous gift of Past Phi Alpha Ljunglin to The Zeta Psi Educational Foundation.

Zeta Psi has a long and storied history, much of which has remained hidden for many years. While our founders and forebears can no longer speak to us directly, the artifacts they left behind can tell us their remarkable stories. Through the James J. Ljunglin Education Center, all brothers can look back, learn and gain a deeper understanding of the true meaning of our Zeta Psi brotherhood.

Contact Greg McElroy at mcelroy174@aol.com or (845) 735-3278, and he will discuss the program and assist you in becoming a member of The Heritage Society.

One’s Heritage Society pledge is not intended to be paid immediately. All that is needed is for The Society member to incorporate his pledge into his will or invest a small amount into a whole life policy with the appropriate foundation as the beneficiary. We encourage those Zetes who are not current members of The Heritage Society to please join hundreds of your brothers in pledging your ongoing gift.

ichard S. Clarke, Alpha (Columbia) ’33, remains the R largest single donor in Zeta Psi’s history. Dick Clarke, as he was known to those in Zeta Psi, became the largest single donor in Zeta Psi’s history following his death in 2003. Brother Clarke left half of his entire estate to The Zeta Psi Heritage Society, which resulted in a bequest of over $1.6 million. His act of extraordinary philanthropy to the fraternity he loved so much has contributed to the growth of The Zeta Psi Educational Foundation for the past two decades and, as a result, many future generations of Zetes. Although a native New Yorker, he lived most of his retirement years in Seattle, and during Zeta Psi’s 1992 annual convention in his adopted city, he received the Distinguished Service Award, Zeta Psi’s highest commendation.

(noun) Zete who contributes their time, talent and treasure to Zeta Psi from their acceptance of a pledge and continuing into their life after university.

“ As an active, I was very involved in my chapter. As a young elder, I want to help my chapter’s elder association to support the chapter, with not only my volunteer efforts and skills, but with financial support. While my donation is small today, I know that combined with my fellow elders, we can improve the experience for today’s actives in my chapter.” Sims McGrath III Washington ‘10

Zete4Life is more than elder donations supporting your chapter and Grand Chapter. It helps provide additional services to active and elder chapters and is a recognition that you have joined Zeta Psi for life!

Join your elder chapters in supporting your chapter so that they can receive IHQ services!

Financial Statements The Foundation was founded in 1944 and has demonstrated steady growth in its financial strength due to the generosity of its donors. Earnings from our endowment make up a significant portion of The Zeta Psi Educational Foundation’s annual operating budget.

Foundation Expenses for the Fiscal Year Ended May 31, 2016

Our budget and financial affairs are managed by the Executive Director, Lauck Walton, RPI ‘84, with oversight from the Finance Committee, chaired by Foundation Treasurer Ron Cass, Case Western ‘84.

Our endowment is managed by the Investment Oversight Committee, chaired by James Donald, Western ‘82. The Committee has selected Alliance Bernstein as our investment advisors. Foundation Revenues – Fiscal Year Ended May 31, 2016