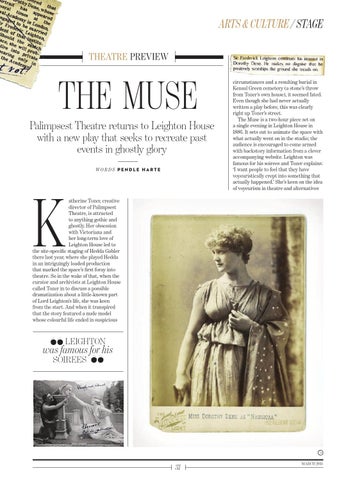 circumstances and a resulting burial in Kensal Green cemetery (a stone’s throw from Tozer’s own house), it seemed fated. Even though she had never actually written a play before, this was clearly right up Tozer’s street. The Muse is a two-hour piece set on a single evening in Leighton House in 1886. It sets out to animate the space with what actually went on in the studio; the audience is encouraged to come armed with backstory information from a clever accompanying website. Leighton was famous for his soirees and Tozer explains: ‘I want people to feel that they have voyeuristically crept into something that actually happened.’ She’s keen on the idea of voyeurism in theatre and alternatives

atherine Tozer, creative director of Palimpsest Theatre, is attracted to anything gothic and ghostly. Her obsession with Victoriana and her long-term love of Leighton House led to the site-specific staging of Hedda Gabler there last year, where she played Hedda in an intriguingly loaded production that marked the space’s first foray into theatre. So in the wake of that, when the curator and archivists at Leighton House called Tozer in to discuss a possible dramatization about a little-known part of Lord Leighton’s life, she was keen from the start. And when it transpired that the story featured a nude model whose colourful life ended in suspicious

was famous for his SOIREES