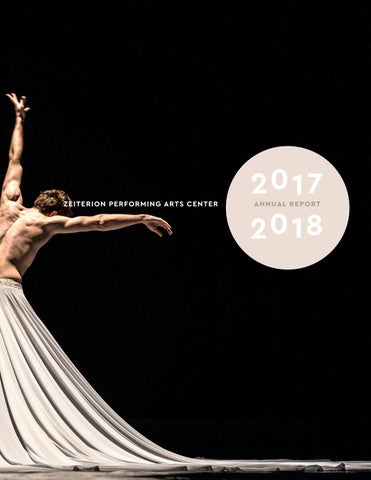 DEAR FRIENDS, Welcome to The Zâ&#x20AC;&#x2122;s 2017/2018 Annual Report. We are excited to share the highlights of last season with you, our supporters, who make it all possible. In these pages, you will find a colorful review of our season, both on the stage and off. In 2017/2018, The Z presented over 60 performances between the Mainstage and Stage Door Live! Series. We hosted over 18,000 schoolchildren across 25 Schooltime performances. We offered 19 classes in the arts for more than 220 students of all ages though our Creative Classroom. All of this - and more - amounts to countless memories made, unique experiences shared with others, and opportunities to learn more about the world through the arts. We cannot emphasize enough how grateful we are to you, our members, donors, sponsors, board members, and volunteers. It is because of you that we are able to be New Bedfordâ&#x20AC;&#x2122;s home for the performing arts. Your support makes it possible to keep ticket prices affordable, to offer scholarships to campers and schoolchildren, and to present programs that take participants deeper into the performing arts. Together, we are creating connections, enriching lives, and investing in the well-being of our community. We hope as you flip through these pages, you are filled with pride for the work you have supported here at The Z. Warm regards,

Peter Hughes Chair Board of Directors

MISSION The Zeiterion Performing Arts Center entertains, educates, and inspires our community by presenting a diverse array of high quality performing artists and providing engaging learning opportunities that contribute to the cultural, social, and economic vitality of the Southcoast.

“The Z is a fantastic place to see a… concert! There’s not a bad seat in the house. A very intimate venue.” – ZEITERION PATRON

Audiences of all ages came together to create lifelong memories at The Z with Pinkalicious, Curious George, and Charlotte’s Web. Families sang along to Frozen, experienced the magic of Masters of Illusion, and lit up at A Very Electric Christmas. These are the moments that last forever.

The Power of Music Music galore! The season was jam-packed with amazing sounds, from classic cover bands to phenomenal piano prodigies. Audiences cheered for Black Violin, Get the Led Out, One Night of Queen, and Tower of Power. Two free concerts – Roberto Plano and The American Band – made classical music accessible to all. The soulful sounds of Luther Vandross performed by Ruben Studdard, Todd Baptista’s Doo Wop, and fadista Ana Moura brought tears to our eyes. Traditional music from Ireland, Portugal, Japan, Africa, and more brought the world to New Bedford. Two phenomenal musicals delighted audiences. And who can forget the season opening performance of Brian Wilson’s Pet Sounds?

The World at Your Doorstep The Zeiterion is committed to bringing the world to New Bedford. An array of performers from across the globe made their way to our stage this year. Highlights include the Yamato Drummers with their traditional Wadaiko drums, Ana Moura with her iconic blend of Portuguese fado and pop music, and Ladysmith Black Mambazo with their blend of Zulu and gospel sounds. Beyond the stage, the third annual Viva Portugal! festival highlighted traditional and modern Portuguese culture and the New Bedford Folk Festival featured several international folk artists.

Through the Stage Door

A one-of-a-kind experience! Stage Door Live! transforms The Z stage into an intimate concert club, bringing you up-close and personal with a wide range of artists. We laughed with Judy Gold, connected to our loved ones with Candace Dalton, traveled to Cape Verde with Zerui Depina, experienced the up-and-coming Adam Ezra Group, and sang along with local favorite Dori Rubbicco. This was an ambitious year for Stage Door Live!, and you made it clear it is an experience not to be missed.

Dance Discovery From traditional ballet to contemporary dance, The Z presented another year of stellar dance performances. Both Jessica Lang Dance and Moscow Festival Ballet demonstrated the unique ability of human movement to communicate a powerful story. This year, dance enthusiasts were invited to deepen their connection to dance in new ways. Two free Dance Barre events demystified dance, while our first ever Cultural Roadtrip brought a group to Jacobâ&#x20AC;&#x2122;s Pillow for a daylong adventure.

VETERAN’S EXPERIENCE The Veteran’s Experience focused on the redemptive power of storytelling and reflected on issues affecting our military veterans, specifically emotional trauma and moral injury. Over three months, three main events connected this program: a performance by Jessica Lang Dance, the one-man play The Things They Carried, and a screening of the documentary Almost Sunrise. Supporting activities included a Drumming Through Trauma workshop, a book discussion, a meditative nature walk, and several pre/post show discussions with artists, scholars, and filmmakers.

“As a veteran of the Vietnam era, I’m still processing that time in my life. These veterans programs have been a welcome gift.” – VETERAN’S EXPERIENCE PARTICIPANT

VETERAN’S EXPERENCE “As a health care provider, I was struck by the term “moral injury” which suddenly made it click for me what this suffering truly is! I hope to work for more understanding of what our veterans are going through.” – VETERAN’S EXPERIENCE PARTICIPANT

LIGHTS UP! MUSICAL THEATER CAMP For the first time ever, The Z offered the Lights Up! musical theater camp where students learn and performed a musical production in just one week! Campers sang, danced, rehearsed, and learned from professional actors and wowed family members and friends with their final performance.

PAGE TO STAGE IN-SCHOOL LITERACY PROGRAM The Page to Stage Literacy Project is an in-school arts integration initiative that engages students in a creative process connecting theater and English Language Arts. Working with a Zeiterion teaching artist, students learned theater fundamentals through the lens of a novel (Percy Jackson and the Lightning Thief). Over the course of 13 lessons, students worked collaboratively on a script writing project, perform their original work, attended a live performance of the novel at The Z and so much more.

ATTENDED THE END OF WEEK PERFORMANCE

Schools throughout Southeastern Massachusetts participate in The Zâ&#x20AC;&#x2122;s SchoolTime Performance series, which offers quality performances to schoolchildren in grades pre-K to 12. To add greater insight, understanding and interpretation of the shows content. The Z offers on-line curriculum guides and pre-and post-performance Q&A sessions with the performing artists.

TEEN AMBASSADORS The Z’s Teen Ambassador Program is a free mentorship program that facilitates learning in the arts through exposure, collaboration, creativity, and engagement. Ambassadors were exposed to unique artistic experiences, and get upclose to the performances through preshow discussion, workshops, and critique writing. Additionally, Ambassadors volunteered over 150 hours throughout the year, supporting the Zeiterion Usher Corps, our two festivals, and vital community organizations like Gift to Give and the Buttonwood Park Zoo.

“The teen ambassador program has made such an impact on my life these past few years... It has made me realize how great my love for the arts is and how impactful the arts can be. The Zeiterion is one of my favorite places to spend time and it has truly become like a second home to me. I have met so many amazing people and had so many special opportunities. Thank you for starting a such a unique program…I am already thinking about how I can be involved in a local theater in college and after college.” –TEEN AMBASSADOR

Teen Ambassadors Volunteer at Gifts to Give

“It’s hard not to be happy when you are dancing salsa!” – CREATIVE CLASSROOM STUDENT Creative Classroom students learn to play the ukulele

ACCESS TO THE ARTS CARD TO CULTURE The Zeiterion is proud to partner with the Deparment of Transitional Assistance and Mass Cultural Council as a participant in the EBT Card to Culture program. This program is the most comprehensive effort of its kind in the nation to open doors to arts and culture experiences for low-income families. New to The Z in the 17/18 Season, this program allows EBT cardholders to purchase tickets to Zeiterion performances for just $5 each.

STUDENTS OF ALL AGES

“Through the EBT card to culture program, I was able to bring a small group who otherwise would not have been able to have the exposure to such a great cultural performance. Thank you for being a part of that program.” – CARD TO CULTURE USER

- Who gave generously to the Z’s Annual Fund.

- Provide the foundation of support from which the Z grows.

- Provide the foundation of support from which the Z grows.

TO COME. OF COURSE, SO DOES

Closer to the issues