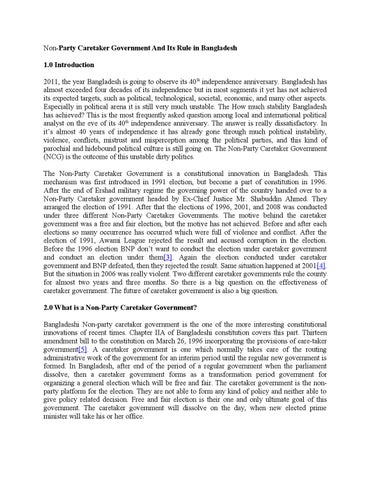 Last retired chief justice Retired chief justice who retired next before the last retired chief justice Last retired judge of appellate division Retired judge of appellate division who retired next before the last retired judge of appellate division 5. Consult with the political parties to select a person among the citizen 6. President will function as chief advisor as additional duty All the other advisors are appointed by the president on the advice of the chief advisor. They have to be qualified as a parliament member, not affiliated with any political party, give it written that they will not stand for the election, and not more than seventy two years of age. The chief advisor will get the status of prime minister and other advisor will get the status of minister. They will not able to take any kind of policy related decision, just able to continue the routine tusk. They will give the government the full support about the peaceful and fair election and give power to elected government with in 90 days of taking power[8]. 3.0 Five different Caretaker Governments Caretaker Government of 1991[9] Because of tremendous political pressure and protest of three different fronts in late 1990 dictator Ershad had to dissolve his government and handover the power to the care taker government. Then there was no option like caretaker government in the constitution on that time. So all parties decided, Ershad have to appoint a neutral and non-partisan person as Vice-President acceptable to the three alliances and other parties under article 51(A) clause 3, article 55(A) clause 1 and article 51 clause 3 of the constitution. After his resignation President Ershad has to hand over power to the Vice-President, who will become the head of the caretaker government as the acting President. The interim care-taker government shall hold a free and fair election for a sovereign parliament within three monthsâ&#x20AC;&#x2122; time of its installation. According to that former chief justice Shahabuddin Ahmed appointed as vice-president, and he become the acting president and chief advisor of caretaker government. Seventeen advisors were appointed on that time. They arrange a free and fair election and BNP form the government by owning the election. Caretaker Government of 1996[10] Caretaker government of 1991 was mutual political solution for a critical political transformation. But the caretaker government of 1996 was an essentiality to go along with the constitution. Sixth national parliament was dissolved on 30 March, 1996. So a caretaker

BNP’s secretary for international-affairs. He was also a relative of Faruk, who was one of the killers of Sekh Mujib. So BNP was petty sure that he will be their favor. To make him fit for the chief advisor post BNP went for fourteenth amendment to the constitution and increased retirement age of justices[14]. But because of the high political pressure and protest of Awami League, they don’t able to implement the conspiracy. Then they went for another one, they appointed the president who was also in their favor as the chief advisor bypassing all other alternative. Awami League is also trying to manipulate the chief advisor post now. They don’t maintain the seniority for appointing chief justice post. Even they don’t consider merit. Justice Motin is the most senior and justice Naim is the most meritorious. But they appoint Justice Khairul Haq as chief justice and he will be the next chief advisor of caretaker government. They appoint Justice Haq for that post because they think that he will be favorable for them. He has cancelled the Fifth Amendment. On the other hand justice Naim is well qualified but he is the brother of BNP leader Hannan Shah. So they really don’t trust the person[15]. 5.0 The Debate about the Reform of Caretaker Government among the Political Parties The idea of reform of caretaker government first came into focus around the year 2006, when BNP design such a mechanism that the chief of advisors of caretaker government will be a person who was affiliated with BNP in past. In 2006, before the formation of new caretaker government, AL demand for reform of caretaker government system. They had some specific reform proposal. Main three of them were as below[16]: • • •

AL leader’s one point behind these reforms proposal was that the framework for selection of a chief adviser acceptable to all parties was very much there in the existing constitution. There are some options about the appointment of chief advisor in the thirteenth amendment to the constitution and the second last option provided is on the basis of consultation with political parties. The leaders demanded to exercise of this option. AL leader’s another point behind these reforms proposal was that the president is selected by the majority party in the parliament. Under normal circumstances president work on the advise of the prime minister. When parliament dissolve, then president own the executive power. Chief advisor is accountable to the president. But chief advisor is the replacement of prime minister. As Suranjit Sengupta said on that time: “Chief adviser should have same powers as prime minister[17]”

This is not consistent with the principles of parliamentary democracy in the first place according to AL leaders. Also the president is selected by the majority party can get favor at the time of caretaker government if the president have the executive power and control over armed forces. AL leaders also accused that these were the reason behind their defeat in 2001. AL leader Abdul Jalil said on that time: “2001 forced us to see defects in the system[18]” But the leaders of that time’s ruling party BNP, defended that if they start to select the chief advisor on the basis of consultation with ‘all’ political parties then finding the right person for the all parties will be impossible. Because they had a belief that major political parties, who are not able to reach consensus on minimum national issues will never be able to rich to the solution of selecting the right person. They also said that caretaker government is for three month but the regular elected government for five years, so it will hhnot be wise to compare each other. The caretaker government must be accountable to president because after the election just the new government form. So if caretakers are not accountable to president then they don’t have any accountability to any one because they are not elected government and they are just for routine work for the interim period. BNP leader Moudud Ahmed said on that time: “Non-elected chief adviser not equal to elected PM[19]” They also defend that president is not elected by any party; he is elected by the parliament. They strongly believed that the ‘four-person factor,’ whom are the president, the chief adviser, the chief election commissioner, and the chief of staff of the army don’t have any influence the election results. Khandaker Mosharraf Hossain, BNP standing committee member said on that time: “1996 and 2001 proved no advantage for incumbents[20]” “Before the 1996 elections, the president Abdur Rahman Biswas, the chief election commissioner Abu Hena, and the army chief Lieutenant General Nasim, were either elected or appointed by the then BNP government with a belief that they would not be harmful to the party. And according to the constitution, Justice Habibur Rahman was the obvious choice as the chief adviser. But the Awami League won the election[21].” But in 2009, the debate on caretaker government system got a new shape. The rolling party Awami League’s leaders think about the change of caretaker government. Their generalsecretary Syed Ashraful Islam publicly said this system as a failure. He also suggested that there should be a debate among the political parties about the future of the continuation of caretaker system. On June 28, 2009 when the budget session of parliament was going on, Syeda Sajeda Chowdhury also said in the parliament to bring to an end the caretaker government system to the parliament members. Also the Awami league leader Suranjit SenGupta called for the termination of caretaker government. But BNP leaders reacted to this as AL was trying to capture the power again by elation manipulation. Then the debate turns to anew way. To neutralize the situation the Alauddin Ahmed, who is prime minister’s avdisor said that some Awami league leaders are

talking about the change in caretaker system but the governments actually didn’t have any plan to change that on that time[22]. In 2010, Prime Minister Sekh Hasina said to the journalist at New York that her government doesn’t have interest to change the system of caretaker government system though they have a bad experience of caretaker government for two years[23]. 6.0 Recommendations for Possible Changes of Caretaker Government or Alternative of this System[24] Even Bangladesh is a democratic nation but the system of caretaker government proves our immaturity in terms of democratic system. The innovation of caretaker government is not our credit, it is our lacking. It can’t be a solution, it is an emergency condition. It proves the mistrust among our political parties and unstable political situation; and it born from that situation, so it can’t be a solution, it will create some new problem every time. This system can prolong for a critical and momentary moment but not forever. Now reformation can be occurred in the current system. Step by step this system can be knocked down. So we need to re-think about this system. But it will be best if we can remove this unexpected child in democracy. Some necessary stapes should be taken to change this situation: •

We have to implement the idea of truly independent election commission with independent infrastructure and manpower. The present Chief Election Commissioner (CEC) ATM Shamsul Huda recently said it is possible to hold free-and-fair elections under a political government[25]. Previous CEC Abu Hena also said that it is obviously possible to hold free-and-fair election under a political government but it should be more powerful. Law and order ensuring agency will be under the control of Election Commission in the time of election. Political recruitment in this kind or agency should be stopped. Civil society should be very active in terms of participation and evaluation. Create social awareness to create a free election commission. In terms of appointing chief election commissioner and chief justice, prime minister should not give any kind of recommendation to the president. A panel will be create consist of representative form civil society to recommend the name of chief justice.

Before doing these we the people especially the politician have to change their constricted mentality of refusing election results, they should respect the popular consent and accept the victory of their opponents. When our politicians will able to carry on this kind of acceptable mentality and will able to respect each other, then it will become possible to change the system of caretaker government. Bibliography 1. Constitution of People’s Republic of Bangladesh. 2. Muhit A. M. Abdul Rajnitik Oikkomotter Shondhane, Mowla Brothers. 3. Ahmed S. Gonotontre Uttoron, Gonotontro Binirman,Mowla Brothers. non party caretaker government in bangladesh and its rule

non party caretaker government in bangladesh and its rule