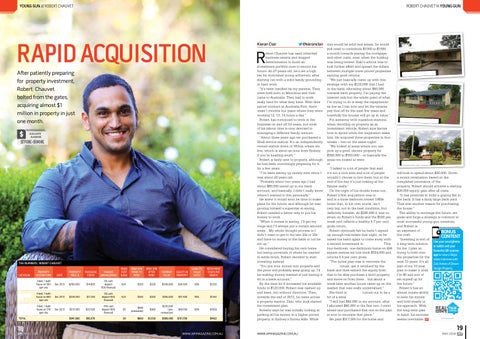 After patiently preparing for property investment, Robert Chauvet bolted from the gates, acquiring almost $1 million in property in just one month.

RENT P/W PRIOR TO RENO

@kieranclair this would be solid real estate, he would

obert Chauvet has used inherited business smarts and dogged determination to build an investment portfolio sure to secure his future. At 27-years-old, he’s set a high bar for motivated young achievers, after starting out with a solid family grounding in hard work. “It’s been instilled by my parents. They were both born in Mauritius and then came to Australia. They had to work really hard for what they have. With their parcel contract at Australia Post, there wasn’t months but years where they were working 12, 13, 14 hours a day.” Robert has continued to work in the business on and off for years, but most of his labour time is now devoted to managing a different family venture. “About three years ago we purchased a Shell service station. It’s an independently owned station down in Wilton where we live, which is about an hour from Sydney if you’re heading south.” Robert is fairly new to property, although he had been unwittingly preparing for it for a few years. “I’ve been saving up money ever since I was about 20 years old. “Probably about two years ago I had about $80,000 saved up in my bank account, and basically, I didn’t really know where I wanted to live personally.” He knew it would soon be time to make plans for the future, and although he was proving himself a superstar at saving, Robert needed a better way to put his money to work. “When it comes to saving, I’ll get my wage and I’ll always put a certain amount away... My whole thought process is I didn’t want to get to my late 20s or 30s and have no money in the bank or not be set up.” He considered buying his own home but being uncertain of where he wanted to settle down, Robert decided to start investing instead. “You put your money into property and the price will probably keep going up. I’ll be making money instead of just having it sit in a bank account.” By the time he’d increased his available funds to $120,000, Robert was cashed up and keen, but without direction. Then, towards the end of 2013, he came across a property mentor, Zaki, who kick-started his investment plan. Roberts says he was initially looking at parking all his money in a higher priced property in Sydney’s Surrey Hills. While

still need to contribute $1000 to $1500 a month towards paying the mortgage and other costs, even when the holding was being rented. Zaki’s advice was to look further afield and spread the dollars between multiple lower priced properties earning good returns. “We just basically came up with this strategy with my $120,000 that I had in the bank, allocating about $40,000 towards each property. I’m paying the interest only but the whole point of what I’m trying to do is keep the repayments as low as I can now and let the tenants pay that off for the next five years and hopefully the houses will go up in value.” For someone with marathon stamina when deciding on property as an investment vehicle, Robert sure knows how to sprint when the inspiration takes him. He acquired three properties in four weeks – two on the same night! “We looked at areas where you can pick up a good, decent property for $300,000 to $350,000 – so basically the areas we looked at were or “I talked to a lot of people that said it’s not a nice area and a lot of people wouldn’t choose to live there, but at the end of the day it’s just looking at the figures really.” On the night of his double home run, Robert’s first acquisition was in and is a three-bedroom lowset 1960s home that, in his own words, isn’t very big, not in the best condition, but definitely liveable. At $290,000 it was no strain on Robert’s funds and the $320 per week rent reflects a healthy 5.7 per cent gross return. Robert obviously felt he hadn’t signed up enough real estate that night, so he raised his hand again to come away with a second investment in This four-bedroom, one-bathroom home on 884 square metres set him back $334,000 and returns 5.4 per cent gross. “The initial plan was to renovate the house, get it revalued by the bank and then extract the equity from that to be able purchase a third property and move on from there... but about a week later another house came up on the market that was really undervalued.” His third in turned out to be a bit of a steal. “I still had $40,000 in my account, after I allocated $40,000 to the first two. I went ahead and purchased that one so the plan is now to renovate that place.” He paid $317,000 for the home and

will look to spend about $30,000. Given a recent revaluation based on the completed renovation of the property, Robert should achieve a sterling $28,000 equity gain after all costs. “It has potential to build a granny flat in the back. It has a fairly large back yard. That was another reason for purchasing the house.” The ability to envisage the future, set goals and forge a strategy is common to most successful young gun investors, and Robert is an exponent of + BONUS the craft. CONTENT “Investing is sort of Use your smartphone a long-term solution or tablet and your for me. I plan on favourite QR scanner trying to hold onto app to view a Skype the properties for the video interview with next 10 years. It’s all Zaki Ameer of Dream part of my 10-year Design Property plan to make it until I’m 40 and sort of set myself up for the future.” Robert’s has an almost innate ability to save his money and hold steady in his approach. With the long-term plan in hand, his success scan.me/wxcmm5 seems inevitable. API 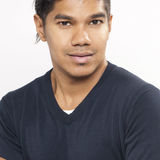