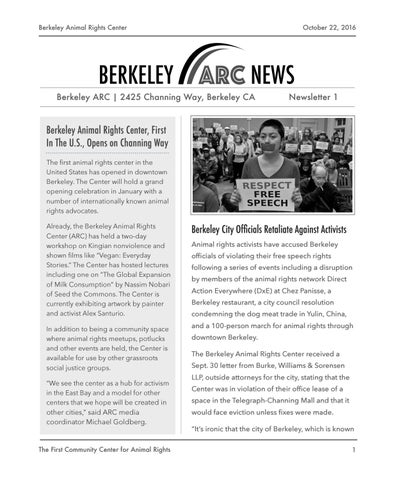 Berkeley Animal Rights Center, First In The U.S., Opens on Channing Way The first animal rights center in the United States has opened in downtown Berkeley. The Center will hold a grand opening celebration in January with a number of internationally known animal rights advocates. Already, the Berkeley Animal Rights Center (ARC) has held a two-day workshop on Kingian nonviolence and shown films like “Vegan: Everyday Stories.” The Center has hosted lectures including one on "The Global Expansion of Milk Consumption” by Nassim Nobari of Seed the Commons. The Center is currently exhibiting artwork by painter and activist Alex Santurio. In addition to being a community space where animal rights meetups, potlucks and other events are held, the Center is available for use by other grassroots social justice groups. “We see the center as a hub for activism in the East Bay and a model for other centers that we hope will be created in other cities,” said ARC media coordinator Michael Goldberg.

Berkeley City Officials Retaliate Against Activists Animal rights activists have accused Berkeley officials of violating their free speech rights following a series of events including a disruption by members of the animal rights network Direct Action Everywhere (DxE) at Chez Panisse, a Berkeley restaurant, a city council resolution condemning the dog meat trade in Yulin, China, and a 100-person march for animal rights through downtown Berkeley. The Berkeley Animal Rights Center received a Sept. 30 letter from Burke, Williams & Sorensen LLP, outside attorneys for the city, stating that the Center was in violation of their office lease of a space in the Telegraph-Channing Mall and that it would face eviction unless fixes were made. “It’s ironic that the city of Berkeley, which is known 1

for free speech, is targeting a center that runs free speech and advocacy training,” Center volunteer Arun Rao told the East Bay Times. Among the violations listed by the City in the letter: use of a lock box on the door into the Center; putting up a Berkeley ARC sign above the entrance without city permission, and using the space for activities outside the purview of a retail store and office. Volunteers at the Animal Rights Center told the San Francisco Chronicle that other businesses in the building have done similar things without being threatened with eviction.

Costco Investigation Finds Cannibalism at Cage-Free Farm What investigators with Direct Action Everywhere found at Pleasant Valley Farms in Farmington, CA, and Hormel’s Farmer John farms in Kings County, CA, was horrifying. The first supplies cage-free eggs to Costco; the second sells them various dead pigs’ body parts. The investigators shot footage of pigs cannibalizing and hens attacking other hens. In both facilities, the air was foul and the animals crammed together so tightly that at times pigs stood on other pigs and hens roosted on other hens. There were numerous animals with open wounds, and at Pleasant Valley Farms dead hens’ bodies scattered among the living.

Berkeley City Council Condemns Chinese Dog Meat Trade Following Investigation The Berkeley City Council passed a resolution in late September condemning the dog meat trade in China following an investigation by Berkeley-based animal rights network DxE. The investigation was covered on ABC’s Nightline and other media outlets. “The continued practice of abusing, killing, and eating dogs is a clear example of animal cruelty,” said Councilman Kriss Worthington, the sponsor of the resolution. “Millions of Chinese citizens have voiced their opposition to the Dog Meat Festival [in Yulin, China] and have supported a ban on the dog meat trade in China altogether.” Titled “Resolution to condemn the Dog Meat Festival in Yulin, China,” and urging China and all countries to end the slaughter of dogs and enact an animal anti-cruelty law with provisions banning the dog meat trade, the resolution was supported by Project Berkeley, an informal coalition of animal rights advocates including members of DxE and UC Berkeley student group the Berkeley Organization for Animal Advocacy. 2

in cage-free facilities was eight-to-ten

times worse than other systems.

The Five Freedoms, as they appear in Costco’s

Behavioral opportunities are higher in

cage-free but only marginally so, and

there have been no studies showing that these lead to improved physiological measures of well-being, including stress. Additionally, although cage-free eggs (from the investigated farm) sold at Costco with the Kirkland brand are labeled Certified Humane, DxE found that the farm does not meet many of the standards necessary for the certification.

the United States investigated in 2012 and

2015, experience none of the five freedoms.

contacted Costco to get a response to

And the truth about cage-free – Costco says that this year it will sell a billion cage-free eggs, 26% of the company’s total egg sales – is that it is worse even than raising hens in cages. Studies show that there is nothing humane about cage-free environments. Mortality rates are two to three times higher in such facilities. Physiological measures of stress are higher or equivalent in cage-free. Environmental conditions (in particular, air quality) are significantly worse in cage-free. In a 2015 report on hen housing by the Coalition for Sustainable Egg Supply (CSES), a group of animal health scientists, egg suppliers and food companies including McDonald’s and Sysco Corp., the researchers found that air quality The First Community Center for Animal Rights

the DxE investigation, executive vice president Ron Vachris decided it was time to talk, and seemed to confirm that the company actually cares little about animal welfare. “They [DxE’s investigation] appear to concern one barn of laying hens at one of the many independent suppliers from which Costco procures cage-free conventional and organic eggs,” Vachris told the Washington Post. “We have reinspected the barn and other operations of this supplier, and based on these inspections and prior audits, we are comfortable with the animal welfare aspects of the operation.” While it would be nice to think that by 3

Breen from Yulin, China in an investigation covered on ABC’s Nightline. In some ways, Oliver is just a normal dog. In others, he’s so different. He loves peanut butter, and he has loved it ever since his saviors offered him some during the

The marchers demanded rights for all sentient animals to be free from harm. The march began at a social gathering with over a hundred Berkeley residents and UC Berkeley students.

rescue. Three dogs were rescued, and he was the one

Berkeley City Council member Kriss Worthington spoke there along with representatives of the Climate Defense Project and The Humane League.

push to help him up. It’s just one of those things he’s

After, attendees made signs they marched through the streets of downtown Berkeley chanting “What do we want? Animal liberation!” and “Their lives, not ours!”

to take a bite of it from their hands. He is very brave. I was the person who carried Oliver to our house when we first saw him in the U.S., so I bonded with him first. He was really small, and he would try to jump onto the sofa but couldn’t make it. I’d always give his butt a little always done, and it brings a little smile to my face. Oliver loves toys and playing so much that he will just play by himself in an empty room or the backyard. He’ll pretend the toy is someone and will start playing with it, and as you’re in the other room you’ll start hearing these playing noises as if he’s playing with someone. Oliver is very curious. If anything is going on, he checks it out. He has a guard dog personality and if he hears a sound while we sleep, he will bark to protect us. 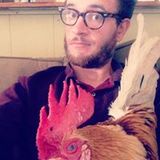 The official newsletter of the Berkeley Animal Rights Center

The official newsletter of the Berkeley Animal Rights Center