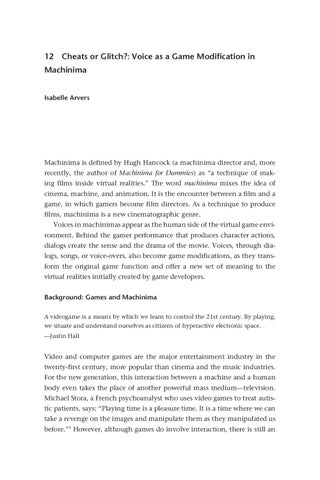 12 Cheats or Glitch?: Voice as a Game Modification in Machinima Isabelle Arvers

Machinima is defined by Hugh Hancock (a machinima director and, more recently, the author of Machinima for Dummies) as “a technique of making films inside virtual realities.” The word machinima mixes the idea of cinema, machine, and animation. It is the encounter between a film and a game, in which gamers become film directors. As a technique to produce films, machinima is a new cinematographic genre. Voices in machinimas appear as the human side of the virtual game environment. Behind the gamer performance that produces character actions, dialogs create the sense and the drama of the movie. Voices, through dialogs, songs, or voice-overs, also become game modifications, as they transform the original game function and offer a new set of meaning to the virtual realities initially created by game developers. Background: Games and Machinima A videogame is a means by which we learn to control the 21st century. By playing, we situate and understand ourselves as citizens of hyperactive electronic space. —Justin Hall

Video and computer games are the major entertainment industry in the twenty-first century, more popular than cinema and the music industries. For the new generation, this interaction between a machine and a human body even takes the place of another powerful mass medium—television. Michael Stora, a French psychoanalyst who uses video games to treat autistic patients, says: “Playing time is a pleasure time. It is a time where we can take a revenge on the images and manipulate them as they manipulated us before.”3 However, although games do involve interaction, there is still an 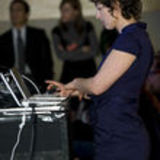 Cheats or glitch: voice as a game modification in machinima

Cheats or glitch: voice as a game modification in machinima