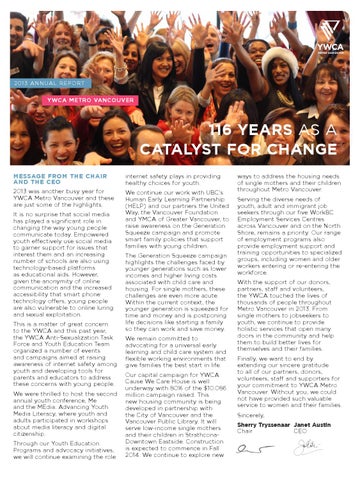 2013 was another busy year for YWCA Metro Vancouver and these are just some of the highlights.

We continue our work with UBCâ&#x20AC;&#x2122;s Human Early Learning Partnership (HELP) and our partners the United Way, the Vancouver Foundation and YMCA of Greater Vancouver, to raise awareness on the Generation Squeeze campaign and promote smart family policies that support families with young children.

It is no surprise that social media has played a significant role in changing the way young people communicate today. Empowered youth effectively use social media to garner support for issues that interest them and an increasing number of schools are also using technology-based platforms as educational aids. However, given the anonymity of online communication and the increased accessibility that smart phone technology offers, young people are also vulnerable to online luring and sexual exploitation. This is a matter of great concern to the YWCA and this past year, the YWCA Anti-Sexualization Task Force and Youth Education Team organized a number of events and campaigns aimed at raising awareness of internet safety among youth and developing tools for parents and educators to address these concerns with young people. We were thrilled to host the second annual youth conference, Me and the MEdia: Advancing Youth Media Literacy, where youth and adults participated in workshops about media literacy and digital citizenship. Through our Youth Education Programs and advocacy initiatives, we will continue examining the role

The Generation Squeeze campaign highlights the challenges faced by younger generations such as lower incomes and higher living costs associated with child care and housing. For single mothers, these challenges are even more acute. Within the current context, the younger generation is squeezed for time and money and is postponing life decisions like starting a family so they can work and save money. We remain committed to advocating for a universal early learning and child care system and flexible working environments that give families the best start in life. Our capital campaign for YWCA Cause We Care House is well underway with 80% of the $10.086 million campaign raised. This new housing community is being developed in partnership with the City of Vancouver and the Vancouver Public Library. It will serve low-income single mothers and their children in StrathconaDowntown Eastside. Construction is expected to commence in Fall 2014. We continue to explore new

ways to address the housing needs of single mothers and their children throughout Metro Vancouver. Serving the diverse needs of youth, adult and immigrant job seekers through our five WorkBC Employment Services Centres across Vancouver and on the North Shore, remains a priority. Our range of employment programs also provide employment support and training opportunities to specialized groups, including women and older workers entering or re-entering the workforce. With the support of our donors, partners, staff and volunteers, the YWCA touched the lives of thousands of people throughout Metro Vancouver in 2013. From single mothers to jobseekers to youth, we continue to provide holistic services that open many doors in the community and help them to build better lives for themselves and their families. Finally, we want to end by extending our sincere gratitude to all of our partners, donors, volunteers, staff and supporters for your commitment to YWCA Metro Vancouver. Without you, we could not have provided such valuable service to women and their families. Sincerely, Sherry Tryssenaar Janet Austin Chair CEO 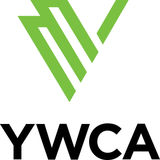 Our Annual Report shows you how we translate our mission into action and our action into outcomes as we move forward to achieve the desired...

Our Annual Report shows you how we translate our mission into action and our action into outcomes as we move forward to achieve the desired...