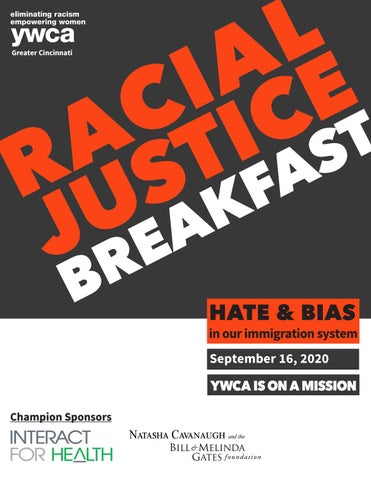 in our immigration system September 16, 2020

2020 KEYNOTE SPEAKER CHRISTINA FIALHO Christina Fialho is the Co-Founder/Executive Director of Freedom for Immigrants (formerly CIVIC), a national nonprofit devoted to abolishing immigration detention. As an attorney, she has spent over 15 years advocating for immigrants. She comes from three generations of immigrants. While in law school, Christina started the first immigration detention visitation program in California with her co-founder, Christina Mansfield. Since then, she has worked with her team at Freedom for Immigrants to mobilize a network of watchdog community members that visit weekly at approximately 70 immigration detention facilities, while creating an alternative model to detention that welcomes immigrants. Christina also has drafted and passed several laws. In 2017, she helped draft, and Freedom for Immigrants co-sponsored, the first statewide bill in the country to put a moratorium on immigration detention expansion, the Dignity Not Detention Act in California. She also helped introduce and pass AB 103 to give California’s Attorney General $10 million to monitor immigration detention facilities (2017) and AB 32 to abolish private prisons in California (2019). In addition, Christina and her team drafted the Detention Oversight Not Expansion (DONE) Act in Congress to put a federal moratorium on detention expansion and fund community-based alternatives. Christina also drafted a House budget amendment introduced by Rep. Pramila Jayapal that was approved in 2019 to prevent the diversion of funds from other government agencies to ICE for immigration enforcement. Christina is a leading expert on immigration detention and appears frequently on national television and radio programs. She has been awarded the 2020 John F. Kennedy New Frontier Award and the 2018 James Irvine Leadership Award among other recognitions. She was appointed to the California Bar Association’s first Civil Justice Strategies Task Force. In 2017, she was featured in Grammywinning artist Miguel’s music video “Now” about immigration, and in 2019, her organization was featured in Season 7 of Netflix’s Orange Is The New Black.

Share your thoughts and images on social media. @ywcacincinnati #StandUp4RJ

2020 RACIAL JUSTICE AWARD HONOREES VINCENT R. BROWN Vincent Randolph Brown, President & CEO of V. Randolph Brown Consulting, a boutique global, management consulting consortium, is a dynamic business leader with a passion for effecting organizational change. He was a Founding Partner and Managing Director of Global Novations, a full-service human capital and talent optimization firm which counted Goldman Sachs as an investor. Throughout his career, Vincent has partnered with premier organizations to develop and implement diversity strategies, optimize talent, and build high-performing leadership teams who thrive in diverse and inclusive environments. He enjoys serving as a role model for minority entrepreneurs and is engaged in causes that reach out to disadvantaged and disenfranchised communities.

JANET P. REID, PH.D. Dr. Janet Reid is a pioneer in the field of diversity, equity and inclusion and the CEO of global management consulting consortium, BRBS World, LLC. Janet has conducted leadership consulting; coaching, and, equity/ diversity/inclusion consulting in over 50 countries and within hundreds of Fortune 500 corporations, internationally headquartered corporations, federal and local government entities, national non-profits, colleges, universities, and foundations. Dr. Reid helped to conceive, organize and lead aspects of the Cincinnati Action Now (CAN) Commission in response to Cincinnati’s racial unrest in 2001, co-chairing the business development committee. Since then, she has been involved in many community and corporate based efforts to promote equity in our region and our world. Together this powerhouse team has developed more than twenty equity/diversity/inclusion-related intellectual properties. Their first book The Phoenix Principles: Leveraging Inclusion to Transform Your Company and, the Phoenix Principles Workbook, helped shape the thinking in modern corporate culture about Diversity & Inclusion. Their second book on the intersectionality of diversity, inclusion, neuroscience and bias, “Intrinsic Inclusion™: Rebooting Your Biased Brain” will be released in the second half of 2020.

YOUR VOICE •YOUR VOTE•YOUR FUTURE

TOWARD EQUITY WORKSHOPS Moving Beyond Diversity & Inclusion Half Day Virtual Implicit Bias Workshop Builds awareness around racial equity and addresses implicit bias and how it impacts us at interpersonal, institutional and systemic levels.

Combines both sessions and helps participants identify individualized next steps strategizing culture change within the workplace to achieve a more equitable organization.