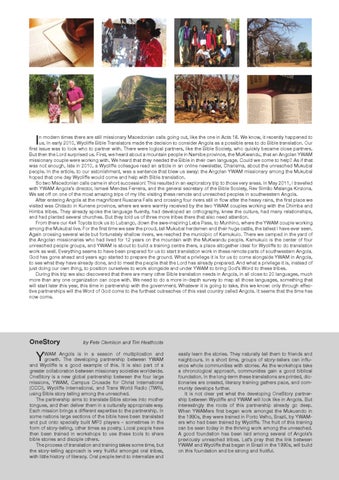 n modern times there are still missionary Macedonian calls going out, like the one in Acts 16. We know, it recently happened to us. In early 2010, Wycliffe Bible Translators made the decision to consider Angola as a possible area to do Bible translation. Our first issue was to look who to partner with. There were logical partners, like the Bible Society, who quickly became close partners. But then the Lord surprised us. First, we heard about a mountain people in Namibe province, the MuKwandu, that an Angolan YWAM missionary couple were working with. We heard that they needed the Bible in their own language. Could we come to help? As if that was not enough, late in 2010, a Wycliffe colleague read an article in an online newsletter, Charisma, about the unreached Mukubal people. In the article, to our astonishment, was a sentence that blew us away: the Angolan YWAM missionary among the Mukubal hoped that one day Wycliffe would come and help with Bible translation. So two Macedonian calls came in short succession! This resulted in an exploratory trip to those very areas. In May 2011, I travelled with YWAM Angola’s director, Ismael Mendes Ferreira, and the general secretary of the Bible Society, Rev Simão Malanga Kinzona. We set off on one of the most amazing trips of my life: visiting these remote and unreached peoples in southwestern Angola. After entering Angola at the magnificent Ruacana Falls and crossing four rivers still in flow after the heavy rains, the first place we visited was Chitado in Kunene province, where we were warmly received by the two YWAM couples working with the Dhimba and Himba tribes. They already spoke the language fluently, had developed an orthography, knew the culture, had many relationships, and had planted several churches. But they told us of three more tribes there that also need attention. From there our 4x4 Toyota took us to Lubango, down the awe-inspiring Leba Pass, to Munhino, where the YWAM couple working among the Mukubal live. For the first time we saw the proud, tall Mukubal herdsmen and their huge cattle, the tallest I have ever seen. Again crossing several wide but fortunately shallow rivers, we reached the município of Kamukuio. There we camped in the yard of the Angolan missionaries who had lived for 12 years on the mountain with the MuKwandu people. Kamukuio is the center of four unreached people groups, and YWAM is about to build a training centre there, a place altogether ideal for Wycliffe to do translation work as well. Everything seems to have been prepared for us to start translation work in these remote parts of southwestern Angola. God has gone ahead and years ago started to prepare the ground. What a privilege it is for us to come alongside YWAM in Angola, to see what they have already done, and to meet the people that the Lord has already prepared. And what a privilege it is, instead of just doing our own thing, to position ourselves to work alongside and under YWAM to bring God’s Word to these tribes. During this trip we also discovered that there are many other Bible translation needs in Angola, in all close to 20 languages, much more than any one organization can cope with. We need to do a more in-depth survey to map all those languages, something that will start later this year, this time in partnership with the government. Whatever it is going to take, this we know: only through effective partnerships will the Word of God come to the furthest outreaches of this vast country called Angola. It seems that the time has now come.

by Pete Clemison and Tim Heathcote

WAM Angola is in a season of multiplication and growth. The developing partnership between YWAM and Wycliffe is a good example of this. It is also part of a greater collaboration between missionary societies worldwide. OneStory is a new global partnership between the four large missions, YWAM, Campus Crusade for Christ International (CCCI), Wycliffe International, and Trans World Radio (TWR), using Bible story telling among the unreached. The partnership aims to translate Bible stories into mother tongues, and then deliver them in a culturally appropriate way. Each mission brings a different expertise to the partnership. In some nations large sections of the bible have been translated and put onto specially built MP3 players – sometimes in the form of story-telling, other times as poetry. Local people have then been trained in workshops to use these tools to share bible stories and disciple others. The process of translation and training takes some time, but the story-telling approach is very fruitful amongst oral tribes, with little history of literacy. Oral people tend to internalize and

easily learn the stories. They naturally tell them to friends and neighbours. In a short time, groups of story-tellers can influence whole communities with stories. As the workshops take a chronological approach, communities gain a good biblical foundation. In the long-term these translations are printed, dictionaries are created, literacy training gathers pace, and community develops further. It is not clear yet what the developing OneStory partnership between Wycliffe and YWAM will look like in Angola. But interestingly the roots of this partnership already go deep. When YWAMers first began work amongst the Mukuando in the 1990s, they were trained in Porto Velho, Brazil, by YWAMers who had been trained by Wycliffe. The fruit of this training can be seen today in the thriving work among the unreached. A good foundation has been laid among several of Angola’s previously unreached tribes. Let’s pray that the link between YWAM and Wycliffe that began in Brazil in the 1990s, will build on this foundation and be strong and fruitful. I love the idea expressed in the Old Testament Psalms about ‘declaring God’s glory to the nations’. There is no doubt that God has been glor...

I love the idea expressed in the Old Testament Psalms about ‘declaring God’s glory to the nations’. There is no doubt that God has been glor...