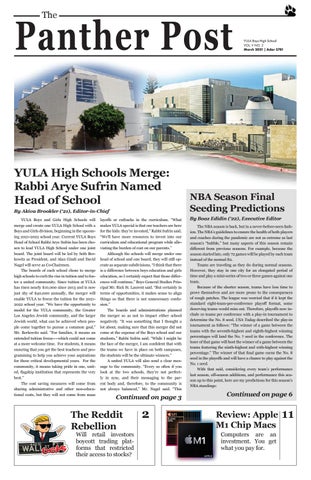 YULA High Schools Merge: Rabbi Arye Sufrin Named Head of School By Akiva Brookler (‘21), Editor-in-Chief YULA Boys and Girls High Schools will merge and create one YULA High School with a Boys and Girls division, beginning in the upcoming 2021-2022 school year. Current YULA Boys Head of School Rabbi Arye Sufrin has been chosen to lead YULA High School under one joint board. The joint board will be led by Seth Berkowitz as President, and Alan Gindi and David Nagel will serve as Co-Chairmen. The boards of each school chose to merge high schools to curb the rise in tuition and to foster a united community. Since tuition at YULA has risen nearly $10,000 since 2013 and is now just shy of $40,000 annually, the merger will enable YULA to freeze the tuition for the 20212022 school year. “We have the opportunity to model for the YULA community, the Greater Los Angeles Jewish community, and the larger Jewish world, what can be achieved when people come together to pursue a common goal,” Mr. Berkowitz said. “For families, it means an extended tuition freeze––which could not come at a more welcome time. For students, it means ensuring that you get the best teachers and programming to help you achieve your aspirations for these critical developmental years. For the community, it means taking pride in one, united, flagship institution that represents the very best.” The cost saving measures will come from sharing administrative and other non-educational costs, but they will not come from mass

layoffs or cutbacks in the curriculum. “What makes YULA special is that our teachers are here for the kids: they’re invested,” Rabbi Sufrin said. “We’ll have more resources to invest into our curriculum and educational program while alleviating the burden of cost on our parents.” Although the schools will merge under one head of school and one board, they will still operate as separate subdivisions. “I think that there is a difference between boys education and girls education, so I certainly expect that those differences will continue,” Boys General Studies Principal Mr. Rick St. Laurent said. “But certainly in terms of opportunities, it makes sense to align things so that there is not unnecessary confusion.” The boards and administrations planned the merger so as not to impact either school negatively. “It was something that I thought a lot about, making sure that this merger did not come at the expense of the Boys school and our students,” Rabbi Sufrin said. “While I might be the face of the merger, I am confident that with the teams we have in place on both campuses, the students will be the ultimate winners.” A united YULA will also send a clear message to the community. “Every so often if you look at the two schools, they’re not perfectly in sync, and their messaging to the parent body and, therefore, to the community is not always balanced,” Mr. Nagel said. “This

NBA Season Final Seeding Predictions By Boaz Edidin (‘22), Executive Editor The NBA season is back, but in a never-before-seen fashion. The NBA’s guidelines to ensure the health of both players and coaches during the pandemic are not as extreme as last season’s “bubble,” but many aspects of this season remain different from previous seasons. For example, because the season started late, only 72 games will be played by each team instead of the normal 82. Teams are traveling as they do during normal seasons. However, they stay in one city for an elongated period of time and play a mini-series of two or three games against one team. Because of the shorter season, teams have less time to prove themselves and are more prone to the consequences of rough patches. The league was worried that if it kept the standard eight-team-per-conference playoff format, some deserving teams would miss out. Therefore, playoffs now include 10 teams per conference with a play-in tournament to determine the No. 8 seed. USA Today described the play-in tournament as follows: “The winner of a game between the teams with the seventh-highest and eighth-highest winning percentages will land the No. 7 seed in the conference. The loser of that game will host the winner of a game between the teams featuring the ninth-highest and 10th-highest winning percentage.” The winner of that final game earns the No. 8 seed in the playoffs and will have a chance to play against the No. 1 seed. With that said, considering every team’s performance last season, off-season additions, and performance this season up to this point, here are my predictions for this season’s NBA standings:

Will retail investors boycott trading platforms that restricted their access to stocks?

Review: Apple M1 Chip Macs Computers are an investment. You get what you pay for.