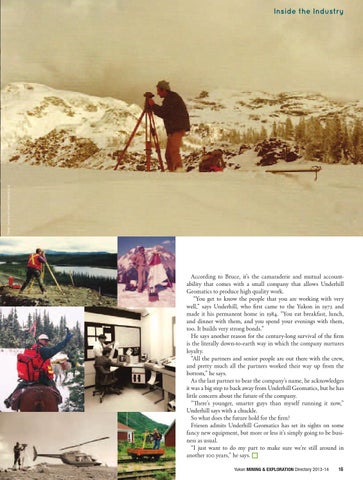 According to Bruce, it’s the camaraderie and mutual accountability that comes with a small company that allows Underhill Geomatics to produce high quality work. “You get to know the people that you are working with very well,” says Underhill, who first came to the Yukon in 1972 and made it his permanent home in 1984. “You eat breakfast, lunch, and dinner with them, and you spend your evenings with them, too. It builds very strong bonds.” He says another reason for the century-long survival of the firm is the literally down-to-earth way in which the company nurtures loyalty. “All the partners and senior people are out there with the crew, and pretty much all the partners worked their way up from the bottom,” he says. As the last partner to bear the company’s name, he acknowledges it was a big step to back away from Underhill Geomatics, but he has little concern about the future of the company. “There’s younger, smarter guys than myself running it now,” Underhill says with a chuckle. So what does the future hold for the firm? Friesen admits Underhill Geomatics has set its sights on some fancy new equipment, but more or less it’s simply going to be business as usual. “I just want to do my part to make sure we’re still around in another 100 years,” he says. A Yukon Mining &amp; Exploration Directory 2013-14   15