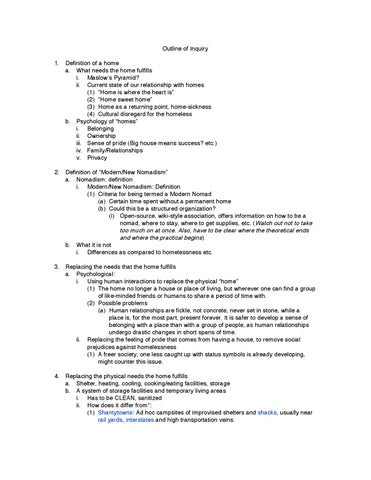 Outline of Inquiry 1. Definition of a home a. What needs the home fulfills i. Maslows Pyramid? ii. Current state of our relationship with homes (1) “Home is where the heart is” (2) “Home sweet home” (3) Home as a returning point, home-sickness (4) Cultural disregard for the homeless b. Psychology of “homes” i. Belonging ii. Ownership iii. Sense of pride (Big house means success? etc.) iv. Family/Relationships v. Privacy 2. Definition of “Modern/New Nomadism” a. Nomadism: definition i. Modern/New Nomadism: Definition (1) Criteria for being termed a Modern Nomad (a) Certain time spent without a permanent home (b) Could this be a structured organization? (i) Open-source, wiki-style association, offers information on how to be a nomad, where to stay, where to get supplies, etc. (Watch out not to take too much on at once. Also, have to be clear where the theoretical ends and where the practical begins) b. What it is not i. Differences as compared to homelessness etc. 3. Replacing the needs that the home fulfills a. Psychological: i. Using human interactions to replace the physical “home” (1) The home no longer a house or place of living, but wherever one can find a group of like-minded friends or humans to share a period of time with. (2) Possible problems (a) Human relationships are fickle, not concrete, never set in stone, while a place is, for the most part, present forever. It is safer to develop a sense of belonging with a place than with a group of people, as human relationships undergo drastic changes in short spans of time. ii. Replacing the feeling of pride that comes from having a house, to remove social prejudices against homelessness (1) A freer society, one less caught up with status symbols is already developing, might counter this issue. 4. Replacing the physical needs the home fulfills a. Shelter, heating, cooling, cooking/eating facilities, storage b. A system of storage facilities and temporary living areas i. Has to be CLEAN, sanitized ii. How does it differ from*: (1) Shantytowns: Ad hoc campsites of improvised shelters and shacks, usually near rail yards, interstates and high transportation veins.

(2) Homeless shelters: such as emergency cold-weather and blala shelters opened by churches or community agencies, which may consist of cots in a heated warehouse, or temporary Christmas Shelters. (3) Inexpensive Boarding houses: Also called flophouses, they offer cheap, lowquality temporary lodging. (4) Residential hotels, where a bed as opposed to an entire room can be rented cheaply in a dorm-like environment. (5) Inexpensive motels also offer cheap, low-quality temporary lodging. However, some who can afford housing live in a motel by choice. For example, David and Jean Davidson spent 22 years at a UK Travelodge. (6) Underground tunnels such as abandoned subway, maintenance, or train tunnels are popular among the permanent homeless. The inhabitants of such refuges are called in some places, like New York City, "Mole People". Natural caves beneath urban centers allow for places where the homeless can congregate. Leaking water pipes, electric wires, and steam pipes allow for some of the essentials of living. 5. Utopia vs. reality a. Viability of New/Modern Nomadism as a lifestyle b. Utopian setting, theoretical perfection of the system with everything in place i. Introduce a theoretical plan, all ideas go, concept over implementation 6. Possible advantages of the New/Modern Nomadic lifestyle a. Less attachment to physical presence b. More attuned to human interactions c. Less bogged down with physical belongings d. Ability to be inspired by different setting almost constantly e. Ability to better interact with environment and society f. Collective/co-working becoming more viable and easier to handle i. Co-studying, co-creating, etc. 7. Social applications of New/Modern Nomadism in the short term a. Homeless people i. Problem of homelessness ii. Michael E. Arth iii. Creation of communities that can sustain the homeless (1) Psychological needs, happiness, safety, sanitation, etc. b. Refugee camps i. Problems behind refugee camps ii. Creation of communities that can offer the psychological support that refugees need. Prevent depressions, etc. (1) On a larger scale, the theory can be applied to nationalism, taking away the idea of the Nation as a “home”, and replacing it with the human interactions that take place within that society. c. Slums i. Psychological problems behind slums d. “Green” aspect of “New/Modern Nomadism” i. Less consumption of goods/energy (?)

Experiment (Separate from theory): 8. Detailed plan for the replacing of physical needs EXPERIMENT.* a. Rotational schedule, storage plans, housing plans b. Licenses? What laws are there regarding housing/living spaces? c. Will it be necessary to create living areas or can current living quarters be appropriated? d. Experiment planning i. Target age group ii. Area/Viable city (1) Living costs not too high (2) Offers safe, clean living areas (3) Governmental/local support? iii. Universities as possible areas (1) Students taking part in this (18-24) (2) Why students? (a) Fewer possessions, more open to experimenting (b) Universities offer unique environments for living as a nomad (c) It may be possible that the concept of nomadism be applied to intellectual/artistic pursuit, not for the average man iv. Costs: Handled by participants, as part of experiment Outline of ideas and structure for paper on New/Modern Nomadism

Outline of ideas and structure for paper on New/Modern Nomadism