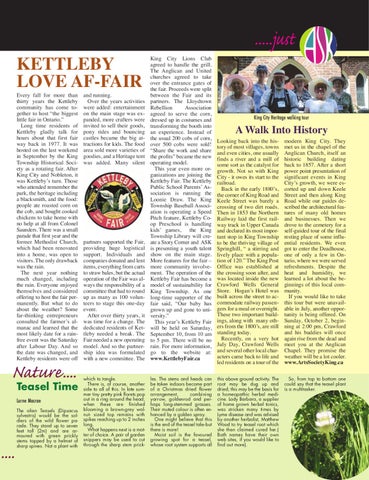 partners supported the Fair, providing huge logistical support. Individuals and companies donated and lent items, everything from carts to straw bales, but the actual operation of the Fair was always the responsibility of a committee that had to round up as many as 100 volunteers to stage this one-day event. After over thirty years, it was time for a change. The dedicated residents of Kettleby needed a break. The Fair needed a new operating model. And so the partnership idea was formulated with a new committee. The

King City Lions Club agreed to handle the grill. The Anglican and United churches agreed to take over the entrance gates of the fair. Proceeds were split between the Fair and its partners. The Lloydtown Rebellion Association agreed to serve the corn, dressed up in costumes and transforming the booth into an experience. Instead of the usual 200 cobs of corn, over 500 cobs were sold! “Share the work and share the profits” became the new operating model. This year even more organizations are joining the Kettleby Fair. The Kettleby Public School Parents’ Association is running the Loonie Draw. The King Township Baseball Association is operating a Speed Pitch feature, Kettleby Coop Preschool is handling kids’ games, the King Township Library will create a Story Corner and ASK is presenting a youth talent show on the main stage. More features for the fair – more community involvement. The operation of the Kettleby Fair has become a model of sustainability for King Township. As one long-time supporter of the fair said, “Our baby has grown up and gone to university.” This year’s Kettleby Fair will be held on Saturday, September 10, from 10 am to 5 pm. There will be no rain. For more information, go to the website at: www.KettlebyFair.ca

which to tangle. There is, of course, another side to all of this. In late summer tiny pretty pink florets pop out in a ring around the head; when these are finished blooming a brown-grey walnut- sized top remains with spikes reaching up to 2 inches long. What happens next is a matter of choice. A pair of garden snippers may be used to cut through the sharp stem prick-

les. The stems and heads can be taken indoors become part of a Christmas dried flower arrangement, combining yarrow, goldenrod and perhaps long-stemmed grasses. Their muted colour is often enhanced by a golden spray. One might believe that this is the end of the teasel tale--but there is more! Moist soil is the favoured growing spot for a teasel, whose root system supports all

KETTLEBY LOVE AF-FAIR Every fall for more than thirty years the Kettleby community has come together to host “the biggest little fair in Ontario.” Long time residents of Kettleby gladly talk for hours about that first fair way back in 1977. It was hosted on the last weekend in September by the King Township Historical Society as a rotating fair. After King City and Nobleton, it was Kettleby’s turn. Those who attended remember the park, the heritage including a blacksmith, and the food: people ate roasted corn on the cob, and bought cooked chickens to take home with no help at all from Colonel Saunders. There was a small parade that first year and the former Methodist Church, which had been renovated into a home, was open to visitors. The only drawback was the rain. The next year nothing much changed, including the rain. Everyone enjoyed themselves and considered offering to host the fair permanently. But what to do about the weather? Some far-thinking entrepreneurs consulted the farmer’s almanac and learned that the most likely date for a rainfree event was the Saturday after Labour Day. And so the date was changed, and Kettleby residents were off

Teasel Time Lorne Macrae The alien Teasels (Dipsacus sylvestris) would be the soldiers of the wild flower parade. They stand up to seven feet tall (2m) and are armoured with green prickly stems topped by a helmet of sharp spines. Not a plant with

and running. Over the years activities were added: entertainment on the main stage was expanded, more crafters were invited to sell their goods, pony rides and bouncing castles became the big attractions for kids. The food area sold more varieties of goodies, and a Heritage tent was added. Many silent

A Walk Into History Looking back into the history of most villages, towns and even cities, one usually finds a river and a mill of some sort as the catalyst for growth. Not so with King City - it owes its start to the railroad. Back in the early 1880’s, the corner of King Road and Keele Street was barely a crossing of two dirt roads. Then in 1853 the Northern Railway laid the first railway track in Upper Canada and declared its most important stop in King Township to be the thriving village of Springhill, “ a stirring and lively place with a population of 120.” The King Post Office was established at the crossing soon after, and was located inside the new Crawford Wells General Store. Hogan’s Hotel was built across the street to accommodate railway passengers for a meal or overnight. These two important buildings, along with many others from the 1800’s, are still standing today. Recently, on a very hot July Day, Crawford Wells and several other local characters came back to life and led residents on a tour of the

modern King City. They met us in the chapel of the Anglican Church, itself an historic building dating back to 1857. After a short power point presentation of significant events in King City’s growth, we were escorted up and down Keele Street and then along King Road while our guides described the architectural features of many old homes and businesses. Then we drove to the cemetery for a self-guided tour of the final resting place of some influential residents. We even got to enter the Deadhouse, one of only a few in Ontario, where we were served refreshments. Despite the heat and humidity, we learned a lot about the beginnings of this local community. If you would like to take this tour but were unavailable in July, another opportunity is being offered. On Sunday, October 2, beginning at 2:00 pm, Crawford and his buddies will once again rise from the dead and meet you at the Anglican Chapel. They promise the weather will be a lot cooler. www.ArtsSocietyKing.ca

this above ground activity. The root may be dug up and dried; this may be the basis for a homeopathic herbal medicine. Lady Barbara, a supplier of home grown herbal tonics, was stricken many times by Lyme disease and was advised by another herbalist, Matthew Wood to try teasel root which she then claimed cured her.( Both names have their own web sites, if you would like to find out more).

So, from top to bottom one could say that the teasel plant is a multitasker. A maganzine of quality living from King Township

A maganzine of quality living from King Township