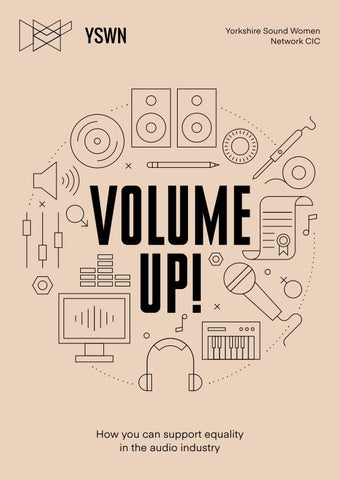 “Out of 25 or so email enquiries for opportunities I’ve received over the past five years, only two have been from women.” — Studio owner, Sheffield

It’s no secret what – or who – is missing from the audio industry. From studio producers and hardware designers, to AV technicians and sound engineers, most roles are still occupied by men. In fact, a 2016 survey by the worldwide Audio Engineering Society found that just seven percent of its members who reported their gender were women. This statistic reflects Yorkshire Sound Women Network’s own findings closer to home.1 Around seven in 10 of the Yorkshire-based recording studios we surveyed have only men working there. Just one in eight of the studios includes any woman engineers or producers. Where women are employed by studios, we found that their roles more commonly include studio management, marketing and instrumental/vocal tuition. YSWN also surveyed a sample of Yorkshire live music venues and found a similar picture. The overall proportion of women working as sound engineers is around 10 percent, although one venue we spoke to reported a 50/50 split of men and women. Many venues employ no women at all in this role. “Everyone I know who works in/owns a studio or is running a production business from a home studio started off their own back. Even at pro level, it’s definitely a cottage industry now. It can easily take 10 years of trying and failing to build up steady business or get a ‘studio’ role as a lot of these roles are earmarked for people in an owner’s immediate network of friends.” — Studio owner, York With so much of the sound industry centred in London, roles in this highly competitive field can be scarce. Four out of five of the studios we surveyed comprise three or fewer people. Around half are solo operations. This is echoed by our finding that around six out of 10 studios do not currently offer internships.

Footnotes: 1. YSWN identified 70 recording, mixing and/or mastering studios operating across West, South, North Yorkshire and the Humber who appeared to be active as of August 2018. All were invited to participate in an online survey; the figures and quotes included here come from the 16 completed responses. Our survey included an option for non-binary and other gender identities but none of the respondents selected this in the gender mix of their

Off the record “I’d be keen to know: do you feel there is a discrepancy between male and female sound engineers because of the routes in or because of lack of interest?” — Head of technical at a music venue, Calderdale Women are interested in sound: not just listening to it, but creating, producing and working with it. How do we know this? Research by Dr Liz Dobson of the University of Huddersfield, co-founder of YSWN, identified nearly 60 active feminist sound collectives, cooperatives and non-profits worldwide. These are dedicated to, “providing knowledge, information, skills and network sharing opportunities, offered formally or informally through events or online resources specifically established for women, non-binary and trans people.” This ever-growing list includes 21 groups in Europe and a further 13 with an international or primarily online reach.2 Yet much of this activity – and the talent, skill and fresh ideas of those practising it – is lost to established studios and venues. A key indicator of this relates to those who pursue formal qualifications in sound-related areas, a traditional first step towards working in the audio industry.

Multi-channel solutions There’s no single factor behind women’s underrepresentation in the audio industry. It can start at school, where boys often dominate tech-based lessons, leaving girls unable to gain hands-on experience. Later on, unawareness of potential career paths, a lack of informal networks or mentoring and overt or unconscious sexism from gatekeepers can all erode the likelihood of finding training and paid roles or setting up a business. That’s why YSWN carries out work at several levels. We support women and non-binary people who are already active in sound through our informal, member-led groups across Yorkshire and beyond. Our practical workshops encourage girls’ confidence with music technology in a nurturing environment. Meanwhile, we’re working with the industry to increase awareness of gender imbalance and find solutions. Established in 2015, in 2018 YSWN became a Community Interest Company (CIC), a non-profit organisation whose aims benefit the public good. As a relatively young organisation, this makes us better placed to grow our work and make more of a difference.

Researchers who analysed applications for 38 music technology degree courses across the UK found that, while the number of applicants increased 14-fold over a decade, only 10 percent of applicants were women. In addition, the ethnicity was also predominantly white.3 “There is a lack of women and/or minority genders in the role of sound engineer. I’m not sure if this is because it’s perceived that it’s a ‘man’s job’. Maybe this perception could be adjusted in schools so young women/minority genders can apply with confidence to become sound engineers. They would then become role models for future generations.” — Venue manager, Leeds

TURN THE VOLUME UP!

Whatever your connection to the audio industry, there are concrete steps you can take to challenge gender inequality.

Donate to YSWN Visit our website yorkshiresoundwomen.com for ways to donate to us or sponsor our activities and the benefits of doing so.

Become a YSWN Industry Partner Talk to us about how you or your organisation could support progression opportunities for women in sound or in-kind support including equipment, software, meeting/ workshop/studio space and marketing materials. Email info@yorkshiresoundwomen.com

Support likeminded groups Identify other bodies that are already supporting women and marginalised people and ask what kind of help you can offer. Maybe you can offer time and expertise for administrative support, website management or accounts. Hire them for consultancy on diversity and inclusion in your workplace. Or amplify their voices on your social media channels.

Make your own changes “Girls don’t see themselves as sound engineers, which is potentially a tragic waste of talent. Just about every engineer or producer on television is male.” — Studio owner, Sheffield Reflect upon your own business and its practices. For a start, if you offer internships, what could you do to make them welcoming and open to a wider audience? Do your publicity materials represent women and non-binary people, or exclude them? If you’re looking for inspiration, female:pressure’s Visibility blog has images shared by more than 500 women showing themselves at work in music production, while soundgirls.org runs profiles of women with successful careers in audio.

This is just a handful of recommendations: for more ideas, search the #audioequitypledge hashtag online.5 Open your ears to equality and join YSWN as we turn the volume up!

Inside Yorkshireâ&#x20AC;&#x2122;s studios Seven in 10 of the studios we surveyed were entirely male environments.

The YSWN story so far

Since 2015 YSWN has delivered more than 80 workshops, on topics including:

Of 50 websites for studios in Yorkshire surveyed, only 10 percent featured women who work at the studio. Over half (54 percent) of the sites showed no women at all, either as clients or employees/freelancers.

54% OF STUDIOS IN YORKSHIRE SHOW NO WOMEN ON THEIR WEBSITE Volume Up! How you can support equality in the audio industry

An advocacy publication from Yorkshire Sound Women Network C.I.C., funded by Rosa’s Voices from the Frontline programme. Open your ears to e...

Volume Up! How you can support equality in the audio industry

An advocacy publication from Yorkshire Sound Women Network C.I.C., funded by Rosa’s Voices from the Frontline programme. Open your ears to e...