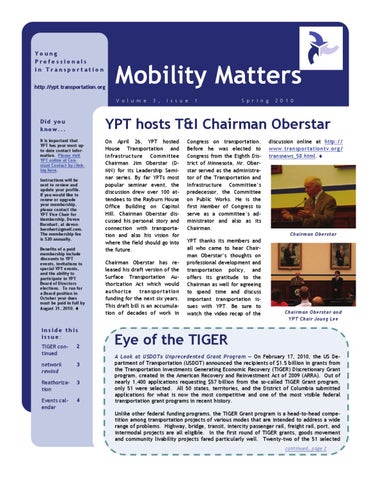 Di d y o u k n o w. .. It is important that YPT has your most upto-date contact information. Please visit YPT online at Constant Contact by clicking here. Instructions will be sent to review and update your profile. If you would like to renew or upgrade your membership, please contact the YPT Vice Chair for Membership, Devon Barnhart, at devonbarnhart@gmail.com. The membership fee is $20 annually. Benefits of a paid membership include discounts to YPT events, invitations to special YPT events, and the ability to participate in YPT Board of Directors elections. To run for a Board position in October your dues must be paid in full by August 31, 2010.

Inside this issue: TIGER continued

On April 26, YPT hosted House Transportation and Infrastructure Committee Chairman Jim Oberstar (DMN) for its Leadership Seminar series. By far YPTs most popular seminar event, the discussion drew over 100 attendees to the Rayburn House Office Building on Capitol Hill. Chairman Oberstar discussed his personal story and connection with transportation and also his vision for where the field should go into the future. Chairman Oberstar has released his draft version of the Surface Transportation Authorization Act which would authorize transportation funding for the next six years. This draft bill is an accumulation of decades of work in

Congress on transportation. Before he was elected to Congress from the Eighth District of Minnesota, Mr. Oberstar served as the administrator of the Transportation and Infrastructure Committee’s predecessor, the Committee on Public Works. He is the first Member of Congress to serve as a committee’s administrator and also as its Chairman. YPT thanks its members and all who came to hear Chairman Oberstar’s thoughts on professional development and transportation policy, and offers its gratitude to the Chairman as well for agreeing to spend time and discuss important transportation issues with YPT. Be sure to watch the video recap of the

Eye of the TIGER A Look at USDOTs Unprecedented Grant Program — On February 17, 2010, the US Department of Transportation (USDOT) announced the recipients of $1.5 billion in grants from the Transportation Investments Generating Economic Recovery (TIGER) Discretionary Grant program, created in the American Recovery and Reinvestment Act of 2009 (ARRA). Out of nearly 1,400 applications requesting $57 billion from the so-called TIGER Grant program, only 51 were selected. All 50 states, territories, and the District of Columbia submitted applications for what is now the most competitive and one of the most visible federal transportation grant programs in recent history. Unlike other federal funding programs, the TIGER Grant program is a head-to-head competition among transportation projects of various modes that are intended to address a wide range of problems. Highway, bridge, transit, intercity passenger rail, freight rail, port, and intermodal projects are all eligible. In the first round of TIGER grants, goods movement and community livability projects fared particularly well. Twenty-two of the 51 selected continued, page 2

projects contained a strong freight component, receiving 49 percent of the $1.5 billion. Another 22 livability projects, including new transit options and intermodal passenger centers, also received TIGER grants. TIGER Grant applications are evaluated on several criteria. All TIGER Grant projects must generate longterm benefits that are greater than their costs. Long-term benefits can be in terms of the economic competitiveness of the nation, environmental sustainability, community livability, state of good repair, and/or safety. Projects are also evaluated according to their level of partnership (financial as well as support from and coordination with other entities), innovation, and near-term economic impacts (i.e., stimulus and project readiness). USDOT is particularly focused on using TIGER grants to fund projects that are challenging to fund under traditional funding programs, such as intermodal or multijurisdictional projects, as well as projects that are located in economically distressed areas. Round II Although USDOT has already announced the winners of the $1.5 billion in ARRA funds, a second round has just begun. In the April 26th Federal Register, USDOT published an interim notice soliciting applications for $600 million of “TIGER II Discretionary Grants”, based on funding made available in the fiscal year 2010 appropriations bill. The program is very similar to the first round but there are some important differences. These include: Application Process A formal pre-application, due July 16, 2010, is now required. Completed applications must be submitted through Grants.gov by August 23, 2010. NEPA must be initiated prior to the pre-application date.

Applicants should note whether they have or would consider a TIGER II TIFIA payment. Grant Size & Cost Sharing The official maximum grant size is $200 million, and no more than $150 million can go to any single state. The minimum grant size is $10 million for projects in urban areas, and $1 million for projects in rural areas. Unlike TIGER I, the FY2010 appropriations bill did not give USDOT the authority to waive the minimum grant size below these thresholds. The maximum federal share of the capital cost allowed is 80 percent, although projects in rural areas are eligible for a share greater than 80 percent.

Will TIGER II be as competitive as TIGER I? The industry should have a much better sense of the competition after the July 16 preapplication deadline, but most are expecting it to have the same order-of-magnitude odds as TIGER I. Less funding is available but fewer applications are expected now that applicants hopefully have a better sense of the type of projects the TIGER program is targeting. Due to the intense competition for limited funds, applicants should keep in mind that few projects are expected to receive more than $50 million in TIGER II; those that do are likely to be very large projects. Along similar lines, projects that offer at least a 50 percent (or even better, at least two-thirds) nonfederal cost share are likely to be much more competitive. Potential applicants should think very carefully about which potential projects might align well with USDOT’s goals for this program, as significant effort can be required to develop a competitive application that provides the kind and level of quantitative analysis that USDOT is seeking. Will There Be A TIGER III? As with any new program, TIGER I received mixed reactions. Some industry groups thought the applications required too much effort and some states that received no funds were very disappointed, but several think tanks and coalition groups praised the program for its multimodal competition and use of merit-based criteria in project selection. USDOT’s FY2011 Budget proposal included $4 billion for a National Infrastructure Innovation and Finance Fund (NIIFF) that looks a lot like the TIGER Grant program and national infrastructure bank proposals; however, the current budgetary outlook suggests that it may be challenging to implement this new program in FY2011. Some in Congress are proposing $1 billion for a third round of TIGER grants, but the ultimate fate of TIGER III funding for FY2011 isn’t likely to be known before later in the year. -- Jeff Ensor, YPT At-Large Board of Director.

network rewind The Russia House in Dupont Circle hosted our December ‘09 and January ’10 Networking Happy Hour meetings. In addition, our January event also attracted many professionals that were in town for the annual Transportation Research Board (TRB) Conference. TRB attendees, YPT members, and YPT newcomers had an excellent opportunity to network and meet rising stars and innovative minds in the field of transportation. In February, YPT hosted an engaging policy seminar at the U.S. Capitol Visitor’s Center. Speaking at this event were Mr. Jack Schenendorf, of Counsel at Covington Burling, Ms. Kathy Ruffalo, President of Ruffalo and Associates LLC, and Mr. Emil Frankel, Director of Transportation Policy for the Bipartisan Policy Center’s National Transportation Policy Project. Attendees at this event learned about the latest transportation policy issues facing our nation, and acquired useful career tips and suggestions. In addition, our guest speakers called for increased investment in our nation’s transportation systems, stressed the importance of transparency and accountability, called for the adaptation of programs that meet the goals of multiple sectors, and emphasized the need for visionary, creative leaders in the transportation field. YPT held its first Networking Happy Hour in Northern Virginia during the month of March. This event took place at the Clarendon Grill in Arlington. In addition to our regular happy hour attendees, this event saw a wide range of fresh faces and newcomers to our events. One of the attendees even included a transportation professional from Italy who is currently conducting research on our country’s transit systems. In April, YPT gladly hosted a Leadership Seminar with the Honorable Jim Oberstar, Chairman of the House Transportation and Infrastructure Committee. During this session, Mr. Oberstar outlined his vision for our country’s transportation policies and shared his suggestions on professional development in transportation. YPT would like to thank the Russia House and the US Capitol for hosting our events, as well as all of our guest speakers for their time and wisdom.

Reauthorization remains in limbo Renewing SAFETEA-LU, the now-expired $286 billion surface transportation authorization, continues to face delay in Congress. A number of factors have led to the current situation. The first and foremost challenge is identifying the necessary set of revenues to pay for a bill that is expected to be a major increase from SAFETEA-LU. For example, the Surface Transportation Authorization Act as presented by Chairman James Oberstar (D-MN) in June 2009 carries a price tag of $450 billion from the Highway Trust Fund (HTF) plus additional $50 billion in high speed rail funding from the General Fund. This call for increased spending in the next bill is also echoed by the two SAFETEA-LU-established national commissions charged to examine the future investment needs in surface transportation. The National Surface Transportation Policy and Revenue Study Commission has called for at least a $225 billion annual capital investment in highway,

transit, passenger rail, and transportation investments; while the National Surface Transportation Infrastructure Financing Commission has called for a $200 billion annual investment level. As a response to this funding dilemma, both of the commissions and a number of transportation user groups, including the US Chamber of Commerce and AAA, have called for increasing the gas and diesel excise taxes that currently comprise more than 85% of the HTF revenues. Many stakeholders view the gas tax increase as the most appropriate shortterm vehicle to bring in new revenues as the gas tax generally has a very low administrative cost and a relatively high yield for minor rate changes (1 cent fuel tax increase brings in about $1.7 billion). However, the political appetite to raise the gas tax remains low. The Obama administration’s refusal to consider a gas tax increase or a distance-based fee alternative (such as a vehicle miles trav-

eled fee) has also taken a potential political cover from members of Congress who may vote for a gas tax increase. Despite this stalemate, hope for action on the long-term surface transportation authorization remains. The HIRE Act has provided enough cash stability to the HTF until 2011, which allows Congress to focus on the five- to six-year reauthorization rather than on short-term fixes to keep the transportation programs. Key senators like Chairman Barbara Boxer (D-CA) and George Voinovich (R-OH) in the Environment and Public Works Committee, which has authorizing jurisdiction over highways, have publicly stated their commitment to bring the Senate version of the bill and pass it by the end of the year. The two-month window after the mid-term elections provide an opportunity for a lame duck Congressional session which may consider passing a reauthorization bill with the attendant gas tax increase without having to answer on Election Day for another two years.

Contact ypt@transportation.org to have an event added to the calendar

YPT Board of Directiors YOUNG PROFESSIONALS IN TRANSPORTATION

YPT is a Washington, DC-based federallyrecognized 501(c)(6) non-profit organization. General membership in YPT is open to anyone engaged or interested in transportation regardless of age. All are welcome to participate in the organization and activities. Mobility Matters is the official publication of YPT. If you have questions about this newsletter or wish to contribute material, please contact Nick Perfili, Vice Chair for Finance-Treasurer, at ypt@transportation.org, Subject: Mobility Matters. 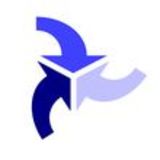