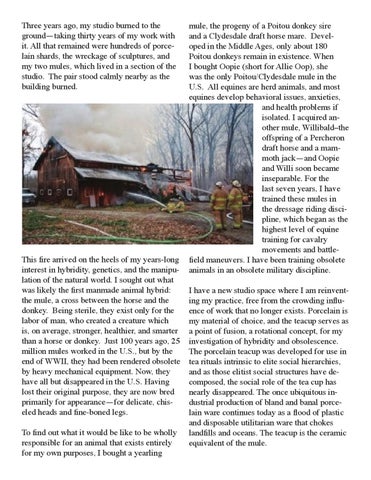 Three years ago, my studio burned to the ground—taking thirty years of my work with it. All that remained were hundreds of porcelain shards, the wreckage of sculptures, and my two mules, which lived in a section of the studio. The pair stood calmly nearby as the building burned.

This fire arrived on the heels of my years-long interest in hybridity, genetics, and the manipulation of the natural world. I sought out what was likely the first manmade animal hybrid: the mule, a cross between the horse and the donkey. Being sterile, they exist only for the labor of man, who created a creature which is, on average, stronger, healthier, and smarter than a horse or donkey. Just 100 years ago, 25 million mules worked in the U.S., but by the end of WWII, they had been rendered obsolete by heavy mechanical equipment. Now, they have all but disappeared in the U.S. Having lost their original purpose, they are now bred primarily for appearance—for delicate, chiseled heads and fine-boned legs. To find out what it would be like to be wholly responsible for an animal that exists entirely for my own purposes, I bought a yearling

mule, the progeny of a Poitou donkey sire and a Clydesdale draft horse mare. Developed in the Middle Ages, only about 180 Poitou donkeys remain in existence. When I bought Oopie (short for Allie Oop), she was the only Poitou/Clydesdale mule in the U.S. All equines are herd animals, and most equines develop behavioral issues, anxieties, and health problems if isolated. I acquired another mule, Willibald–the offspring of a Percheron draft horse and a mammoth jack—and Oopie and Willi soon became inseparable. For the last seven years, I have trained these mules in the dressage riding discipline, which began as the highest level of equine training for cavalry movements and battlefield maneuvers. I have been training obsolete animals in an obsolete military discipline. I have a new studio space where I am reinventing my practice, free from the crowding influence of work that no longer exists. Porcelain is my material of choice, and the teacup serves as a point of fusion, a rotational concept, for my investigation of hybridity and obsolescence. The porcelain teacup was developed for use in tea rituals intrinsic to elite social hierarchies, and as those elitist social structures have decomposed, the social role of the tea cup has nearly disappeared. The once ubiquitous industrial production of bland and banal porcelain ware continues today as a flood of plastic and disposable utilitarian ware that chokes landfills and oceans. The teacup is the ceramic equivalent of the mule. 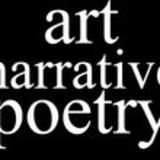