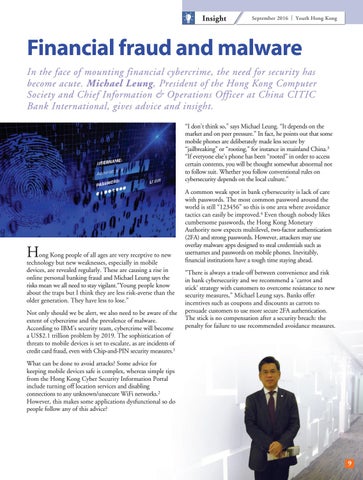 Financial fraud and malware In the face of mounting financial cybercrime, the need for security has become acute. Michael Leung, President of the Hong Kong Computer Society and Chief Information & Operations Officer at China CITIC Bank International, gives advice and insight. “I don’t think so,” says Michael Leung. “It depends on the market and on peer pressure.” In fact, he points out that some mobile phones are deliberately made less secure by “jailbreaking” or “rooting,” for instance in mainland China.3 “If everyone else’s phone has been “rooted” in order to access certain contents, you will be thought somewhat abnormal not to follow suit. Whether you follow conventional rules on cybersecurity depends on the local culture.”

H ong Kong people of all ages are very receptive to new technology but new weaknesses, especially in mobile devices, are revealed regularly. These are causing a rise in online personal banking fraud and Michael Leung says the risks mean we all need to stay vigilant.“Young people know about the traps but I think they are less risk-averse than the older generation. They have less to lose.” Not only should we be alert, we also need to be aware of the extent of cybercrime and the prevalence of malware. According to IBM’s security team, cybercrime will become a US$2.1 trillion problem by 2019. The sophistication of threats to mobile devices is set to escalate, as are incidents of credit card fraud, even with Chip-and-PIN security measures.1

A common weak spot in bank cybersecurity is lack of care with passwords. The most common password around the world is still “123456” so this is one area where avoidance tactics can easily be improved.4 Even though nobody likes cumbersome passwords, the Hong Kong Monetary Authority now expects multilevel, two-factor authentication (2FA) and strong passwords. However, attackers may use overlay malware apps designed to steal credentials such as usernames and passwords on mobile phones. Inevitably, financial institutions have a tough time staying ahead. “There is always a trade-off between convenience and risk in bank cybersecurity and we recommend a ‘carrot and stick’ strategy with customers to overcome resistance to new security measures,” Michael Leung says. Banks offer incentives such as coupons and discounts as carrots to persuade customers to use more secure 2FA authentication. The stick is no compensation after a security breach: the penalty for failure to use recommended avoidance measures.

What can be done to avoid attacks? Some advice for keeping mobile devices safe is complex, whereas simple tips from the Hong Kong Cyber Security Information Portal include turning off location services and disabling connections to any unknown/unsecure WiFi networks.2 However, this makes some applications dysfunctional so do people follow any of this advice?