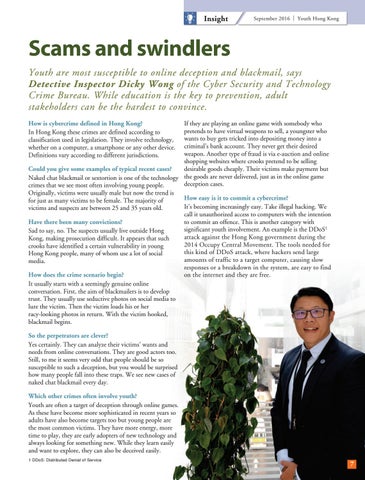 Scams and swindlers Youth are most susceptible to online deception and blackmail, says Detective Inspector Dicky Wong of the Cyber Security and Technology Crime Bureau. While education is the key to prevention, adult stakeholders can be the hardest to convince. How is cybercrime defined in Hong Kong? In Hong Kong these crimes are defined according to classification used in legislation. They involve technology, whether on a computer, a smartphone or any other device. Definitions vary according to different jurisdictions.

If they are playing an online game with somebody who pretends to have virtual weapons to sell, a youngster who wants to buy gets tricked into depositing money into a criminal’s bank account. They never get their desired weapon. Another type of fraud is via e-auction and online shopping websites where crooks pretend to be selling Could you give some examples of typical recent cases? desirable goods cheaply. Their victims make payment but Naked chat blackmail or sextortion is one of the technology the goods are never delivered, just as in the online game deception cases. crimes that we see most often involving young people. Originally, victims were usually male but now the trend is How easy is it to commit a cybercrime? for just as many victims to be female. The majority of It’s becoming increasingly easy. Take illegal hacking. We victims and suspects are between 25 and 35 years old. call it unauthorized access to computers with the intention Have there been many convictions? to commit an offence. This is another category with significant youth involvement. An example is the DDoS1 Sad to say, no. The suspects usually live outside Hong attack against the Hong Kong government during the Kong, making prosecution difficult. It appears that such 2014 Occupy Central Movement. The tools needed for crooks have identified a certain vulnerability in young this kind of DDoS attack, where hackers send large Hong Kong people, many of whom use a lot of social amounts of traffic to a target computer, causing slow media. responses or a breakdown in the system, are easy to find How does the crime scenario begin? on the internet and they are free. It usually starts with a seemingly genuine online conversation. First, the aim of blackmailers is to develop trust. They usually use seductive photos on social media to lure the victim. Then the victim loads his or her racy-looking photos in return. With the victim hooked, blackmail begins. So the perpetrators are clever? Yes certainly. They can analyze their victims’ wants and needs from online conversations. They are good actors too. Still, to me it seems very odd that people should be so susceptible to such a deception, but you would be surprised how many people fall into these traps. We see new cases of naked chat blackmail every day. Which other crimes often involve youth? Youth are often a target of deception through online games. As these have become more sophisticated in recent years so adults have also become targets too but young people are the most common victims. They have more energy, more time to play, they are early adopters of new technology and always looking for something new. While they learn easily and want to explore, they can also be deceived easily. 1 DDoS: Distributed Denial of Service