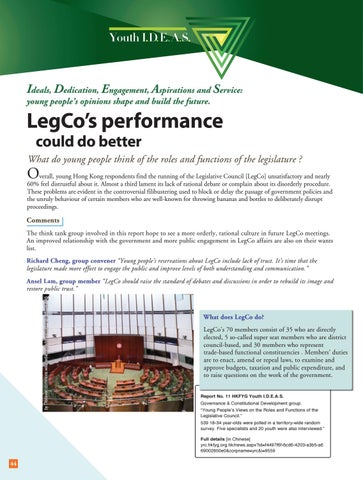 LegCo’s performance could do better

What do young people think of the roles and functions of the legislature ?

O verall, young Hong Kong respondents find the running of the Legislative Council [LegCo] unsatisfactory and nearly 60% feel distrustful about it. Almost a third lament its lack of rational debate or complain about its disorderly procedure. These problems are evident in the controversial filibustering used to block or delay the passage of government policies and the unruly behaviour of certain members who are well-known for throwing bananas and bottles to deliberately disrupt proceedings.

Comments The think tank group involved in this report hope to see a more orderly, rational culture in future LegCo meetings. An improved relationship with the government and more public engagement in LegCo affairs are also on their wants list. Richard Cheng, group convener “Young people’s reservations about LegCo include lack of trust. It’s time that the legislature made more effort to engage the public and improve levels of both understanding and communication.”

Ansel Lam, group member “LegCo should raise the standard of debates and discussions in order to rebuild its image and restore public trust.”

What does LegCo do? LegCo’s 70 members consist of 35 who are directly elected, 5 so-called super seat members who are district council-based, and 30 members who represent trade-based functional constituencies . Members’ duties are to enact, amend or repeal laws, to examine and approve budgets, taxation and public expenditure, and to raise questions on the work of the government. Report No. 11 HKFYG Youth I.D.E.A.S.

“Young People’s Views on the Roles and Functions of the Legislative Council.”