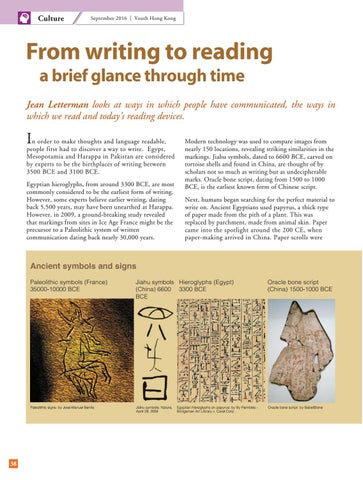 From writing to reading a brief glance through time Jean Letterman looks at ways in which people have communicated, the ways in which we read and todayâ&#x20AC;&#x2122;s reading devices.

n order to make thoughts and language readable, people first had to discover a way to write. Egypt, Mesopotamia and Harappa in Pakistan are considered by experts to be the birthplaces of writing between 3500 BCE and 3100 BCE. Egyptian hieroglyphs, from around 3300 BCE, are most commonly considered to be the earliest form of writing. However, some experts believe earlier writing, dating back 5,500 years, may have been unearthed at Harappa. However, in 2009, a ground-breaking study revealed that markings from sites in Ice Age France might be the precursor to a Paleolithic system of written communication dating back nearly 30,000 years.

Modern technology was used to compare images from nearly 150 locations, revealing striking similarities in the markings. Jiahu symbols, dated to 6600 BCE, carved on tortoise shells and found in China, are thought of by scholars not so much as writing but as undecipherable marks. Oracle bone script, dating from 1500 to 1000 BCE, is the earliest known form of Chinese script. Next, humans began searching for the perfect material to write on. Ancient Egyptians used papyrus, a thick type of paper made from the pith of a plant. This was replaced by parchment, made from animal skin. Paper came into the spotlight around the 200 CE, when paper-making arrived in China. Paper scrolls were