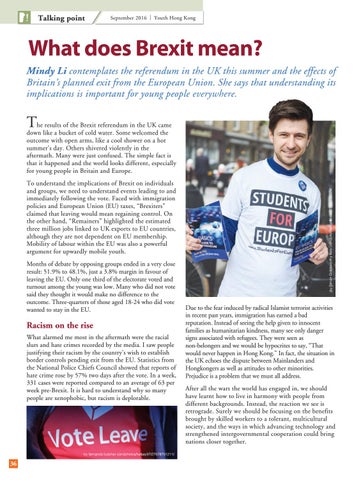 What does Brexit mean? Mindy Li contemplates the referendum in the UK this summer and the effects of Britain’s planned exit from the European Union. She says that understanding its implications is important for young people everywhere.

To understand the implications of Brexit on individuals and groups, we need to understand events leading to and immediately following the vote. Faced with immigration policies and European Union (EU) taxes, “Brexiters” claimed that leaving would mean regaining control. On the other hand, “Remainers” highlighted the estimated three million jobs linked to UK exports to EU countries, although they are not dependent on EU membership. Mobility of labour within the EU was also a powerful argument for upwardly mobile youth. Months of debate by opposing groups ended in a very close result: 51.9% to 48.1%, just a 3.8% margin in favour of leaving the EU. Only one third of the electorate voted and turnout among the young was low. Many who did not vote said they thought it would make no difference to the outcome. Three-quarters of those aged 18-24 who did vote wanted to stay in the EU.

Racism on the rise What alarmed me most in the aftermath were the racial slurs and hate crimes recorded by the media. I saw people justifying their racism by the country’s wish to establish border controls pending exit from the EU. Statistics from the National Police Chiefs Council showed that reports of hate crime rose by 57% two days after the vote. In a week, 331 cases were reported compared to an average of 63 per week pre-Brexit. It is hard to understand why so many people are xenophobic, but racism is deplorable.

he results of the Brexit referendum in the UK came down like a bucket of cold water. Some welcomed the outcome with open arms, like a cool shower on a hot summer’s day. Others shivered violently in the aftermath. Many were just confused. The simple fact is that it happened and the world looks different, especially for young people in Britain and Europe.

Due to the fear induced by radical Islamist terrorist activities in recent past years, immigration has earned a bad reputation. Instead of seeing the help given to innocent families as humanitarian kindness, many see only danger signs associated with refugees. They were seen as non-belongers and we would be hypocrites to say, “That would never happen in Hong Kong.” In fact, the situation in the UK echoes the dispute between Mainlanders and Hongkongers as well as attitudes to other minorities. Prejudice is a problem that we must all address. After all the wars the world has engaged in, we should have learnt how to live in harmony with people from different backgrounds. Instead, the reaction we see is retrograde. Surely we should be focusing on the benefits brought by skilled workers to a tolerant, multicultural society, and the ways in which advancing technology and strengthened intergovernmental cooperation could bring nations closer together.