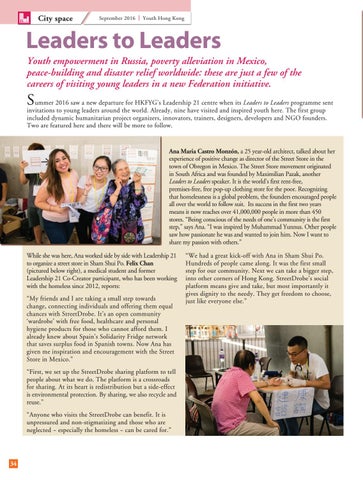 Leaders to Leaders Youth empowerment in Russia, poverty alleviation in Mexico, peace-building and disaster relief worldwide: these are just a few of the careers of visiting young leaders in a new Federation initiative.

ummer 2016 saw a new departure for HKFYG’s Leadership 21 centre when its Leaders to Leaders programme sent invitations to young leaders around the world. Already, nine have visited and inspired youth here. The first group included dynamic humanitarian project organizers, innovators, trainers, designers, developers and NGO founders. Two are featured here and there will be more to follow.

Ana Maria Castro Monzón, a 25 year-old architect, talked about her experience of positive change as director of the Street Store in the town of Obregon in Mexico. The Street Store movement originated in South Africa and was founded by Maximilian Pazak, another Leaders to Leaders speaker. It is the world’s first rent-free, premises-free, free pop-up clothing store for the poor. Recognizing that homelessness is a global problem, the founders encouraged people all over the world to follow suit. Its success in the first two years means it now reaches over 41,000,000 people in more than 450 stores. “Being conscious of the needs of one’s community is the first step,” says Ana. “I was inspired by Muhammad Yunnus. Other people saw how passionate he was and wanted to join him. Now I want to share my passion with others.” While she was here, Ana worked side by side with Leadership 21 to organize a street store in Sham Shui Po. Felix Chan (pictured below right), a medical student and former Leadership 21 Co-Creator participant, who has been working with the homeless since 2012, reports: “My friends and I are taking a small step towards change, connecting individuals and offering them equal chances with StreetDrobe. It’s an open community ‘wardrobe’ with free food, healthcare and personal hygiene products for those who cannot afford them. I already knew about Spain’s Solidarity Fridge network that saves surplus food in Spanish towns. Now Ana has given me inspiration and encouragement with the Street Store in Mexico.” “First, we set up the StreetDrobe sharing platform to tell people about what we do. The platform is a crossroads for sharing. At its heart is redistribution but a side-effect is environmental protection. By sharing, we also recycle and reuse.” “Anyone who visits the StreetDrobe can benefit. It is unpressured and non-stigmatizing and those who are neglected − especially the homeless − can be cared for.”

“We had a great kick-off with Ana in Sham Shui Po. Hundreds of people came along. It was the first small step for our community. Next we can take a bigger step, into other corners of Hong Kong. StreetDrobe’s social platform means give and take, but most importantly it gives dignity to the needy. They get freedom to choose, just like everyone else.”