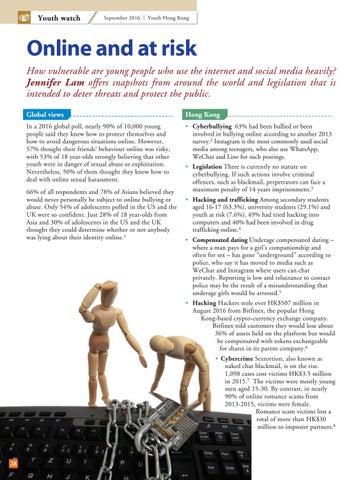 Online and at risk How vulnerable are young people who use the internet and social media heavily? Jennifer Lam offers snapshots from around the world and legislation that is intended to deter threats and protect the public. Global views

In a 2016 global poll, nearly 90% of 10,000 young people said they knew how to protect themselves and how to avoid dangerous situations online. However, 57% thought their friends’ behaviour online was risky, with 53% of 18 year-olds strongly believing that other youth were in danger of sexual abuse or exploitation. Nevertheless, 50% of them thought they knew how to deal with online sexual harassment.

• Cyberbullying 63% had been bullied or been involved in bullying online according to another 2013 survey.2 Instagram is the most commonly used social media among teenagers, who also use WhatsApp, WeChat and Line for such postings.

• Legislation There is currently no statute on cyberbullying. If such actions involve criminal offences, such as blackmail, perpetrators can face a maximum penalty of 14 years imprisonment.3 • Hacking and trafficking Among secondary students aged 16-17 (63.3%), university students (29.1%) and youth at risk (7.6%), 49% had tried hacking into computers and 40% had been involved in drug trafficking online.4 • Compensated dating Underage compensated dating – where a man pays for a girl’s companionship and often for sex – has gone “underground” according to police, who say it has moved to media such as WeChat and Instagram where users can chat privately. Reporting is low and reluctance to contact police may be the result of a misunderstanding that underage girls would be arrested.5 • Hacking Hackers stole over HK$507 million in August 2016 from Bitfinex, the popular Hong Kong-based crypto-currency exchange company. Bitfinex told customers they would lose about 36% of assets held on the platform but would be compensated with tokens exchangeable for shares in its parent company.6 • Cybercrime Sextortion, also known as naked chat blackmail, is on the rise. 1,098 cases cost victims HK$3.5 million in 2015.7 The victims were mostly young men aged 15-30. By contrast, in nearly 90% of online romance scams from 2013-2015, victims were female. Romance scam victims lost a total of more than HK$30 million to imposter partners.8