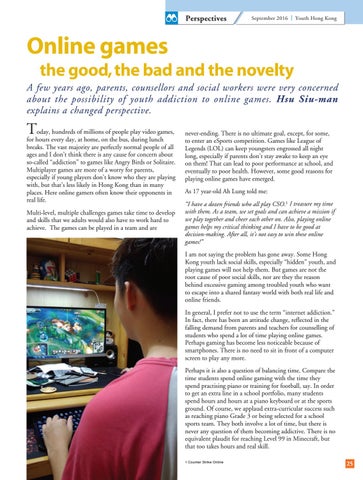 Online games the good, the bad and the novelty A few years ago, parents, counsellors and social workers were very concerned about the possibility of youth addiction to online games. Hsu Siu-man explains a changed perspective.

oday, hundreds of millions of people play video games, for hours every day, at home, on the bus, during lunch breaks. The vast majority are perfectly normal people of all ages and I don’t think there is any cause for concern about so-called “addiction” to games like Angry Birds or Solitaire. Multiplayer games are more of a worry for parents, especially if young players don’t know who they are playing with, but that’s less likely in Hong Kong than in many places. Here online gamers often know their opponents in real life. Multi-level, multiple challenges games take time to develop and skills that we adults would also have to work hard to achieve. The games can be played in a team and are

never-ending. There is no ultimate goal, except, for some, to enter an eSports competition. Games like League of Legends (LOL) can keep youngsters engrossed all night long, especially if parents don’t stay awake to keep an eye on them! That can lead to poor performance at school, and eventually to poor health. However, some good reasons for playing online games have emerged. As 17 year-old Ah Lung told me: “I have a dozen friends who all play CSO.1 I treasure my time with them. As a team, we set goals and can achieve a mission if we play together and cheer each other on. Also, playing online games helps my critical thinking and I have to be good at decision-making. After all, it’s not easy to win these online games!” I am not saying the problem has gone away. Some Hong Kong youth lack social skills, especially “hidden” youth, and playing games will not help them. But games are not the root cause of poor social skills, nor are they the reason behind excessive gaming among troubled youth who want to escape into a shared fantasy world with both real life and online friends. In general, I prefer not to use the term “internet addiction.” In fact, there has been an attitude change, reflected in the falling demand from parents and teachers for counselling of students who spend a lot of time playing online games. Perhaps gaming has become less noticeable because of smartphones. There is no need to sit in front of a computer screen to play any more. Perhaps it is also a question of balancing time. Compare the time students spend online gaming with the time they spend practising piano or training for football, say. In order to get an extra line in a school portfolio, many students spend hours and hours at a piano keyboard or at the sports ground. Of course, we applaud extra-curricular success such as reaching piano Grade 3 or being selected for a school sports team. They both involve a lot of time, but there is never any question of them becoming addictive. There is no equivalent plaudit for reaching Level 99 in Minecraft, but that too takes hours and real skill. 1 Counter Strike Online