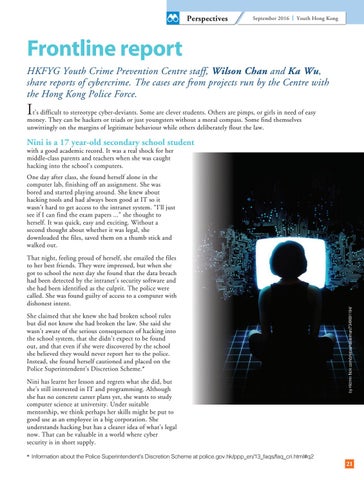 Imoney. t’s difficult to stereotype cyber-deviants. Some are clever students. Others are pimps, or girls in need of easy They can be hackers or triads or just youngsters without a moral compass. Some find themselves unwittingly on the margins of legitimate behaviour while others deliberately flout the law.

with a good academic record. It was a real shock for her middle-class parents and teachers when she was caught hacking into the school’s computers.

That night, feeling proud of herself, she emailed the files to her best friends. They were impressed, but when she got to school the next day she found that the data breach had been detected by the intranet’s security software and she had been identified as the culprit. The police were called. She was found guilty of access to a computer with dishonest intent. She claimed that she knew she had broken school rules but did not know she had broken the law. She said she wasn’t aware of the serious consequences of hacking into the school system, that she didn’t expect to be found out, and that even if she were discovered by the school she believed they would never report her to the police. Instead, she found herself cautioned and placed on the Police Superintendent’s Discretion Scheme.* Nini has learnt her lesson and regrets what she did, but she’s still interested in IT and programming. Although she has no concrete career plans yet, she wants to study computer science at university. Under suitable mentorship, we think perhaps her skills might be put to good use as an employee in a big corporation. She understands hacking but has a clearer idea of what’s legal now. That can be valuable in a world where cyber security is in short supply. * Information about the Police Superintendent's Discretion Scheme at police.gov.hk/ppp_en/13_faqs/faq_cri.html#q2

One day after class, she found herself alone in the computer lab, finishing off an assignment. She was bored and started playing around. She knew about hacking tools and had always been good at IT so it wasn’t hard to get access to the intranet system. “I’ll just see if I can find the exam papers ...” she thought to herself. It was quick, easy and exciting. Without a second thought about whether it was legal, she downloaded the files, saved them on a thumb stick and walked out.