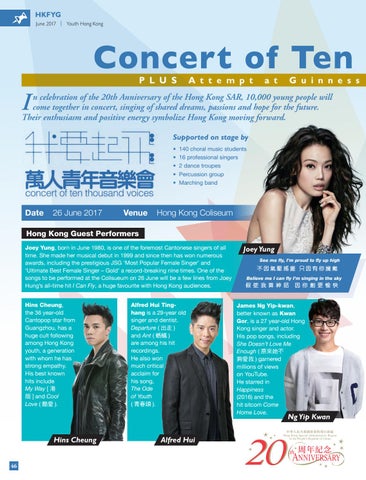 Hong Kong Guest Performers Joey Yung, born in June 1980, is one of the foremost Cantonese singers of all time. She made her musical debut in 1999 and since then has won numerous awards, including the prestigious JSG ‘Most Popular Female Singer’ and ‘Ultimate Best Female Singer – Gold’ a record-breaking nine times. One of the songs to be performed at the Colisueum on 26 June will be a few lines from Joey Hung’s all-time hit I Can Fly, a huge favourite with Hong Kong audiences. Hins Cheung, the 36 year-old Cantopop star from Guangzhou, has a huge cult following among Hong Kong youth, a generation with whom he has strong empathy. His best known hits include My Way [ 港 版 ] and Cool Love ( 酷愛 ).

Alfred Hui Tinghang is a 29-year old singer and dentist. Departure ( 出走 ) and Ant ( 螞蟻 ) are among his hit recordings. He also won much critical acclaim for his song, The Ode 香港特別行政區成立二十周年官方標誌 使用指引 of Youth ( 青春頌 ).

James Ng Yip-kwan, better known as Kwan Gor, is a 27 year-old Hong Kong singer and actor. His pop songs, including She Doesn’t Love Me Enough ( 原來她不 夠愛我 ) garnered millions of views on YouTube. He starred in Happiness (2016) and the hit sitcom Come Home Love.