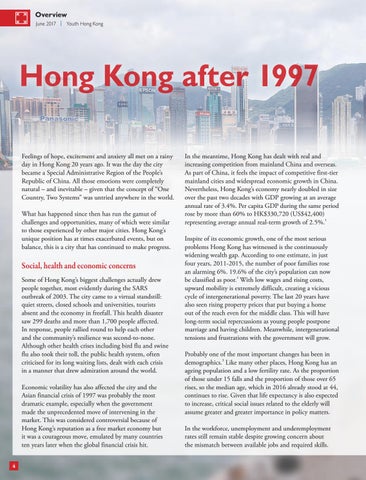 Hong Kong after 1997 Feelings of hope, excitement and anxiety all met on a rainy day in Hong Kong 20 years ago. It was the day the city became a Special Administrative Region of the People’s Republic of China. All those emotions were completely natural – and inevitable – given that the concept of “One Country, Two Systems” was untried anywhere in the world. What has happened since then has run the gamut of challenges and opportunities, many of which were similar to those experienced by other major cities. Hong Kong’s unique position has at times exacerbated events, but on balance, this is a city that has continued to make progress.

Social, health and economic concerns Some of Hong Kong’s biggest challenges actually drew people together, most evidently during the SARS outbreak of 2003. The city came to a virtual standstill: quiet streets, closed schools and universities, tourists absent and the economy in freefall. This health disaster saw 299 deaths and more than 1,700 people affected. In response, people rallied round to help each other and the community’s resilience was second-to-none. Although other health crises including bird flu and swine flu also took their toll, the public health system, often criticised for its long waiting lists, dealt with each crisis in a manner that drew admiration around the world. Economic volatility has also affected the city and the Asian financial crisis of 1997 was probably the most dramatic example, especially when the government made the unprecedented move of intervening in the market. This was considered controversial because of Hong Kong’s reputation as a free market economy but it was a courageous move, emulated by many countries ten years later when the global financial crisis hit. 4

In the meantime, Hong Kong has dealt with real and increasing competition from mainland China and overseas. As part of China, it feels the impact of competitive first-tier mainland cities and widespread economic growth in China. Nevertheless, Hong Kong’s economy nearly doubled in size over the past two decades with GDP growing at an average annual rate of 3.4%. Per capita GDP during the same period rose by more than 60% to HK$330,720 (US$42,400) representing average annual real-term growth of 2.5%.1 Inspite of its economic growth, one of the most serious problems Hong Kong has witnessed is the continuously widening wealth gap. According to one estimate, in just four years, 2011-2015, the number of poor families rose an alarming 6%. 19.6% of the city’s population can now be classified as poor.2 With low wages and rising costs, upward mobility is extremely difficult, creating a vicious cycle of intergenerational poverty. The last 20 years have also seen rising property prices that put buying a home out of the reach even for the middle class. This will have long-term social repercussions as young people postpone marriage and having children. Meanwhile, intergenerational tensions and frustrations with the government will grow. Probably one of the most important changes has been in demographics.3 Like many other places, Hong Kong has an ageing population and a low fertility rate. As the proportion of those under 15 falls and the proportion of those over 65 rises, so the median age, which in 2016 already stood at 44, continues to rise. Given that life expectancy is also expected to increase, critical social issues related to the elderly will assume greater and greater importance in policy matters. In the workforce, unemployment and underemployment rates still remain stable despite growing concern about the mismatch between available jobs and required skills.