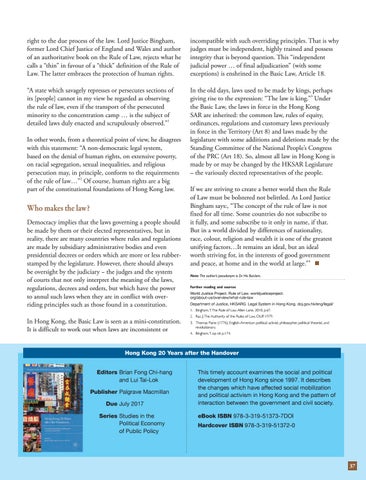 right to the due process of the law. Lord Justice Bingham, former Lord Chief Justice of England and Wales and author of an authoritative book on the Rule of Law, rejects what he calls a “thin” in favour of a “thick” definition of the Rule of Law. The latter embraces the protection of human rights.

incompatible with such overriding principles. That is why judges must be independent, highly trained and possess integrity that is beyond question. This “independent judicial power … of final adjudication” (with some exceptions) is enshrined in the Basic Law, Article 18.

“A state which savagely represses or persecutes sections of its [people] cannot in my view be regarded as observing the rule of law, even if the transport of the persecuted minority to the concentration camp … is the subject of detailed laws duly enacted and scrupulously observed.”1

In the old days, laws used to be made by kings, perhaps giving rise to the expression: “The law is king.”3 Under the Basic Law, the laws in force in the Hong Kong SAR are inherited: the common law, rules of equity, ordinances, regulations and customary laws previously in force in the Territory (Art 8) and laws made by the legislature with some additions and deletions made by the Standing Committee of the National People’s Congress of the PRC (Art 18). So, almost all law in Hong Kong is made by or may be changed by the HKSAR Legislature – the variously elected representatives of the people.

In other words, from a theoretical point of view, he disagrees with this statement: “A non-democratic legal system, based on the denial of human rights, on extensive poverty, on racial segregation, sexual inequalities, and religious persecution may, in principle, conform to the requirements of the rule of law…”2 Of course, human rights are a big part of the constitutional foundations of Hong Kong law.

Who makes the law? Democracy implies that the laws governing a people should be made by them or their elected representatives, but in reality, there are many countries where rules and regulations are made by subsidiary administrative bodies and even presidential decrees or orders which are more or less rubberstamped by the legislature. However, there should always be oversight by the judiciary − the judges and the system of courts that not only interpret the meaning of the laws, regulations, decrees and orders, but which have the power to annul such laws when they are in conflict with overriding principles such as those found in a constitution. In Hong Kong, the Basic Law is seen as a mini-constitution. It is difficult to work out when laws are inconsistent or

If we are striving to create a better world then the Rule of Law must be bolstered not belittled. As Lord Justice Bingham says:, “The concept of the rule of law is not fixed for all time. Some countries do not subscribe to it fully, and some subscribe to it only in name, if that. But in a world divided by differences of nationality, race, colour, religion and wealth it is one of the greatest unifying factors…It remains an ideal, but an ideal worth striving for, in the interests of good government and peace, at home and in the world at large.”4   Note The author’s pseudonym is Dr Ho But-lam. Further reading and sources World Justice Project. Rule of Law. worldjusticeproject. org/about-us/overview/what-rule-law Department of Justice, HKSARG. Legal System in Hong Kong. doj.gov.hk/eng/legal/ 1. Bingham, T. The Rule of Law. Allen Lane, 2010. p.67. 2. Raz, J: The Authority of the Rules of Law, OUP, 1979. 3. Thomas Paine (1776), English-American political activist, philosopher, political theorist, and revolutionary. 4. Bingham, T. op cit p.174.