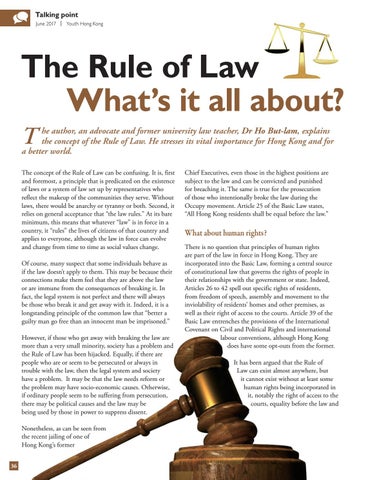 The Rule of Law What’s it all about? T

he author, an advocate and former university law teacher, Dr Ho But-lam, explains the concept of the Rule of Law. He stresses its vital importance for Hong Kong and for a better world.

The concept of the Rule of Law can be confusing. It is, first and foremost, a principle that is predicated on the existence of laws or a system of law set up by representatives who reflect the makeup of the communities they serve. Without laws, there would be anarchy or tyranny or both. Second, it relies on general acceptance that “the law rules.” At its bare minimum, this means that whatever “law” is in force in a country, it “rules” the lives of citizens of that country and applies to everyone, although the law in force can evolve and change from time to time as social values change. Of course, many suspect that some individuals behave as if the law doesn’t apply to them. This may be because their connections make them feel that they are above the law or are immune from the consequences of breaking it. In fact, the legal system is not perfect and there will always be those who break it and get away with it. Indeed, it is a longstanding principle of the common law that “better a guilty man go free than an innocent man be imprisoned.” However, if those who get away with breaking the law are more than a very small minority, society has a problem and the Rule of Law has been hijacked. Equally, if there are people who are or seem to be persecuted or always in trouble with the law, then the legal system and society have a problem. It may be that the law needs reform or the problem may have socio-economic causes. Otherwise, if ordinary people seem to be suffering from persecution, there may be political causes and the law may be being used by those in power to suppress dissent. Nonetheless, as can be seen from the recent jailing of one of Hong Kong’s former 36

Chief Executives, even those in the highest positions are subject to the law and can be convicted and punished for breaching it. The same is true for the prosecution of those who intentionally broke the law during the Occupy movement. Article 25 of the Basic Law states, “All Hong Kong residents shall be equal before the law.”

What about human rights? There is no question that principles of human rights are part of the law in force in Hong Kong. They are incorporated into the Basic Law, forming a central source of constitutional law that governs the rights of people in their relationships with the government or state. Indeed, Articles 26 to 42 spell out specific rights of residents, from freedom of speech, assembly and movement to the inviolability of residents’ homes and other premises, as well as their right of access to the courts. Article 39 of the Basic Law entrenches the provisions of the International Covenant on Civil and Political Rights and international labour conventions, although Hong Kong does have some opt-outs from the former. It has been argued that the Rule of Law can exist almost anywhere, but it cannot exist without at least some human rights being incorporated in it, notably the right of access to the courts, equality before the law and