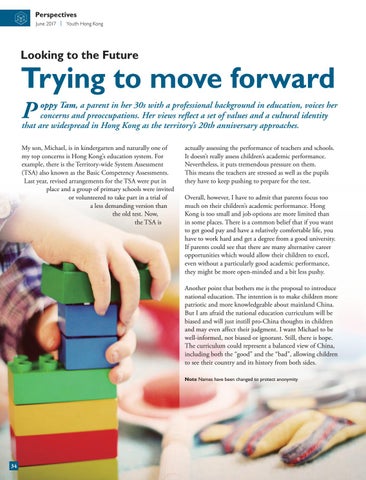 oppy Tam, a parent in her 30s with a professional background in education, voices her concerns and preoccupations. Her views reflect a set of values and a cultural identity that are widespread in Hong Kong as the territory’s 20th anniversary approaches.

My son, Michael, is in kindergarten and naturally one of my top concerns is Hong Kong’s education system. For example, there is the Territory-wide System Assessment (TSA) also known as the Basic Competency Assessments. Last year, revised arrangements for the TSA were put in place and a group of primary schools were invited or volunteered to take part in a trial of a less demanding version than the old test. Now, the TSA is

actually assessing the performance of teachers and schools. It doesn’t really assess children’s academic performance. Nevertheless, it puts tremendous pressure on them. This means the teachers are stressed as well as the pupils they have to keep pushing to prepare for the test. Overall, however, I have to admit that parents focus too much on their children’s academic performance. Hong Kong is too small and job options are more limited than in some places. There is a common belief that if you want to get good pay and have a relatively comfortable life, you have to work hard and get a degree from a good university. If parents could see that there are many alternative career opportunities which would allow their children to excel, even without a particularly good academic performance, they might be more open-minded and a bit less pushy. Another point that bothers me is the proposal to introduce national education. The intention is to make children more patriotic and more knowledgeable about mainland China. But I am afraid the national education curriculum will be biased and will just instill pro-China thoughts in children and may even affect their judgment. I want Michael to be well-informed, not biased or ignorant. Still, there is hope. The curriculum could represent a balanced view of China, including both the “good” and the “bad”, allowing children to see their country and its history from both sides. Note Names have been changed to protect anonymity