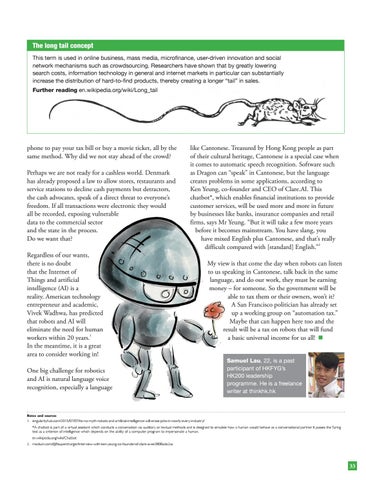 The long tail concept This term is used in online business, mass media, microfinance, user-driven innovation and social network mechanisms such as crowdsourcing. Researchers have shown that by greatly lowering search costs, information technology in general and internet markets in particular can substantially increase the distribution of hard-to-find products, thereby creating a longer “tail” in sales. Further reading en.wikipedia.org/wiki/Long_tail

phone to pay your tax bill or buy a movie ticket, all by the same method. Why did we not stay ahead of the crowd? Perhaps we are not ready for a cashless world. Denmark has already proposed a law to allow stores, restaurants and service stations to decline cash payments but detractors, the cash advocates, speak of a direct threat to everyone’s freedom. If all transactions were electronic they would all be recorded, exposing vulnerable data to the commercial sector and the state in the process. Do we want that? Regardless of our wants, there is no doubt that the Internet of Things and artificial intelligence (AI) is a reality. American technology entrepreneur and academic, Vivek Wadhwa, has predicted that robots and AI will eliminate the need for human workers within 20 years.1 In the meantime, it is a great area to consider working in!

like Cantonese. Treasured by Hong Kong people as part of their cultural heritage, Cantonese is a special case when it comes to automatic speech recognition. Software such as Dragon can “speak” in Cantonese, but the language creates problems in some applications, according to Ken Yeung, co-founder and CEO of Clare.AI. This chatbot*, which enables financial institutions to provide customer services, will be used more and more in future by businesses like banks, insurance companies and retail firms, says Mr Yeung. “But it will take a few more years before it becomes mainstream. You have slang, you have mixed English plus Cantonese, and that’s really difficult compared with [standard] English.”2

One big challenge for robotics and AI is natural language voice recognition, especially a language

My view is that come the day when robots can listen to us speaking in Cantonese, talk back in the same language, and do our work, they must be earning money – for someone. So the government will be able to tax them or their owners, won’t it? A San Francisco politician has already set up a working group on “automation tax.” Maybe that can happen here too and the result will be a tax on robots that will fund a basic universal income for us all!  Samuel Lau, 22, is a past participant of HKFYG’s HK200 leadership programme. He is a freelance writer at thinkhk.hk

*A chatbot is part of a virtual assistant which conducts a conversation via auditory or textual methods and is designed to simulate how a human would behave as a conversational partner. It passes the Turing test as a criterion of intelligence which depends on the ability of a computer program to impersonate a human.