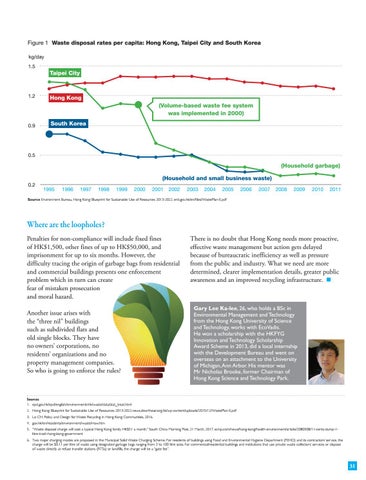 Where are the loopholes? Penalties for non-compliance will include fixed fines of HK$1,500, other fines of up to HK$50,000, and imprisonment for up to six months. However, the difficulty tracing the origin of garbage bags from residential and commercial buildings presents one enforcement problem which in turn can create fear of mistaken prosecution and moral hazard. Another issue arises with the “three nil” buildings such as subdivided flats and old single blocks. They have no owners’ corporations, no residents’ organizations and no property management companies. So who is going to enforce the rules?

There is no doubt that Hong Kong needs more proactive, effective waste management but action gets delayed because of bureaucratic inefficiency as well as pressure from the public and industry. What we need are more determined, clearer implementation details, greater public awareness and an improved recycling infrastructure.

Sources 1. epd.gov.hk/epd/english/environmentinhk/waste/data/stat_treat.html 2. Hong Kong: Blueprint for Sustainable Use of Resources 2013-2022.news.cleartheair.org.hk/wp-content/uploads/2015/12/WastePlan-E.pdf 3. Lo CH. Policy and Design for Waste Recycling in Hong Kong Communities, 2016. 4. gov.hk/en/residents/environment/waste/msw.htm 5. “Waste disposal charge will cost a typical Hong Kong family HK$51 a month.” South China Morning Post, 21 March, 2017. scmp.com/news/hong-kong/health-environment/article/2080508/11-cents-dump-1litre-trash-hong-kong-government 6. Two major charging modes are proposed in the Municipal Solid Waste Charging Scheme. For residents of buildings using Food and Environmental Hygiene Department (FEHD) and its contractors’ service, the charge will be $0.11 per litre of waste using designated garbage bags ranging from 3 to 100 litre sizes. For commercial/residential buildings and institutions that use private waste collectors’ services or dispose of waste directly at refuse transfer stations (RTSs) or landfills, the charge will be a “gate fee”.