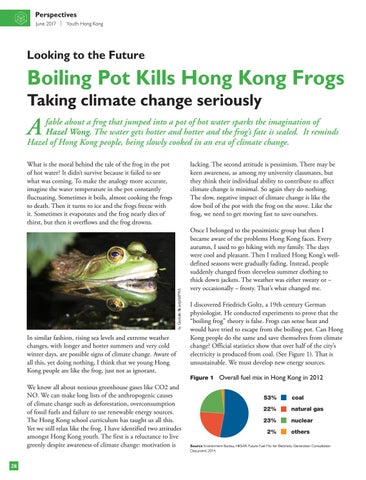 fable about a frog that jumped into a pot of hot water sparks the imagination of Hazel Wong. The water gets hotter and hotter and the frog’s fate is sealed. It reminds Hazel of Hong Kong people, being slowly cooked in an era of climate change. lacking. The second attitude is pessimism. There may be keen awareness, as among my university classmates, but they think their individual ability to contribute to affect climate change is minimal. So again they do nothing. The slow, negative impact of climate change is like the slow boil of the pot with the frog on the stove. Like the frog, we need to get moving fast to save ourselves.

What is the moral behind the tale of the frog in the pot of hot water? It didn’t survive because it failed to see what was coming. To make the analogy more accurate, imagine the water temperature in the pot constantly fluctuating. Sometimes it boils, almost cooking the frogs to death. Then it turns to ice and the frogs freeze with it. Sometimes it evaporates and the frog nearly dies of thirst, but then it overflows and the frog drowns.

In similar fashion, rising sea levels and extreme weather changes, with longer and hotter summers and very cold winter days, are possible signs of climate change. Aware of all this, yet doing nothing, I think that we young Hong Kong people are like the frog, just not as ignorant. We know all about noxious greenhouse gases like CO2 and NO. We can make long lists of the anthropogenic causes of climate change such as deforestation, overconsumption of fossil fuels and failure to use renewable energy sources. The Hong Kong school curriculum has taught us all this. Yet we still relax like the frog. I have identified two attitudes amongst Hong Kong youth. The first is a reluctance to live greenly despite awareness of climate change: motivation is 28

Once I belonged to the pessimistic group but then I became aware of the problems Hong Kong faces. Every autumn, I used to go hiking with my family. The days were cool and pleasant. Then I realized Hong Kong’s welldefined seasons were gradually fading. Instead, people suddenly changed from sleeveless summer clothing to thick down jackets. The weather was either sweaty or − very occasionally − frosty. That’s what changed me. I discovered Friedrich Goltz, a 19th century German physiologist. He conducted experiments to prove that the “boiling frog” theory is false. Frogs can sense heat and would have tried to escape from the boiling pot. Can Hong Kong people do the same and save themselves from climate change? Official statistics show that over half of the city’s electricity is produced from coal. (See Figure 1). That is unsustainable. We must develop new energy sources. Figure 1 Overall fuel mix in Hong Kong in 2012 53%