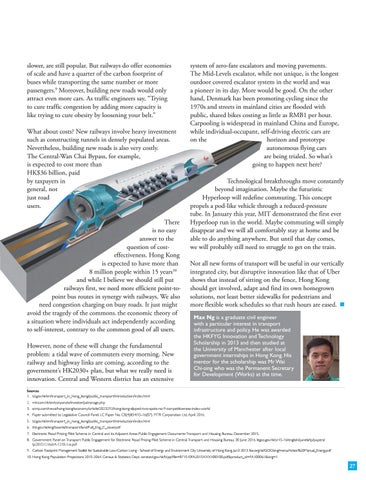 slower, are still popular. But railways do offer economies of scale and have a quarter of the carbon footprint of buses while transporting the same number or more passengers.9 Moreover, building new roads would only attract even more cars. As traffic engineers say, “Trying to cure traffic congestion by adding more capacity is like trying to cure obesity by loosening your belt.” What about costs? New railways involve heavy investment such as constructing tunnels in densely populated areas. Nevertheless, building new roads is also very costly. The Central-Wan Chai Bypass, for example, is expected to cost more than HK$36 billion, paid by taxpayers in general, not just road users. There is no easy answer to the question of costeffectiveness. Hong Kong is expected to have more than 8 million people within 15 years10 and while I believe we should still put railways first, we need more efficient point-topoint bus routes in synergy with railways. We also need congestion charging on busy roads. It just might avoid the tragedy of the commons. the economic theory of a situation where individuals act independently according to self-interest, contrary to the common good of all users. However, none of these will change the fundamental problem: a tidal wave of commuters every morning. New railway and highway links are coming, according to the government’s HK2030+ plan, but what we really need is innovation. Central and Western district has an extensive

system of zero-fare escalators and moving pavements. The Mid-Levels escalator, while not unique, is the longest outdoor covered escalator system in the world and was a pioneer in its day. More would be good. On the other hand, Denmark has been promoting cycling since the 1970s and streets in mainland cities are flooded with public, shared bikes costing as little as RMB1 per hour. Carpooling is widespread in mainland China and Europe, while individual-occupant, self-driving electric cars are on the horizon and prototype autonomous flying cars are being trialed. So what’s going to happen next here? Technological breakthroughs move constantly beyond imagination. Maybe the futuristic Hyperloop will redefine commuting. This concept propels a pod-like vehicle through a reduced-pressure tube. In January this year, MIT demonstrated the first ever Hyperloop run in the world. Maybe commuting will simply disappear and we will all comfortably stay at home and be able to do anything anywhere. But until that day comes, we will probably still need to struggle to get on the train. Not all new forms of transport will be useful in our vertically integrated city, but disruptive innovation like that of Uber shows that instead of sitting on the fence, Hong Kong should get involved, adapt and find its own homegrown solutions, not least better sidewalks for pedestrians and more flexible work schedules so that rush hours are eased.  Max Ng is a graduate civil engineer with a particular interest in transport infrastructure and policy. He was awarded the HKFYG Innovation and Technology Scholarship in 2013 and then studied at the University of Manchester after local government internships in Hong Kong. His mentor for the scholarship was Mr Wai Chi-sing who was the Permanent Secretary for Development (Works) at the time.