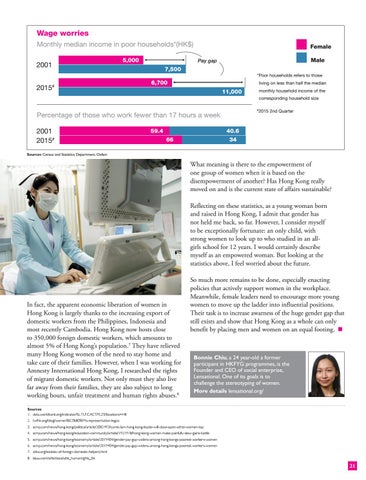 7,500 *Poor households refers to those

What meaning is there to the empowerment of one group of women when it is based on the disempowerment of another? Has Hong Kong really moved on and is the current state of affairs sustainable? Reflecting on these statistics, as a young woman born and raised in Hong Kong, I admit that gender has not held me back, so far. However, I consider myself to be exceptionally fortunate: an only child, with strong women to look up to who studied in an allgirls school for 12 years. I would certainly describe myself as an empowered woman. But looking at the statistics above, I feel worried about the future.

In fact, the apparent economic liberation of women in Hong Kong is largely thanks to the increasing export of domestic workers from the Philippines, Indonesia and most recently Cambodia. Hong Kong now hosts close to 350,000 foreign domestic workers, which amounts to almost 5% of Hong Kongâ&#x20AC;&#x2122;s population.7 They have relieved many Hong Kong women of the need to stay home and take care of their families. However, when I was working for Amnesty International Hong Kong, I researched the rights of migrant domestic workers. Not only must they also live far away from their families, they are also subject to long working hours, unfair treatment and human rights abuses.8

So much more remains to be done, especially enacting policies that actively support women in the workplace. Meanwhile, female leaders need to encourage more young women to move up the ladder into influential positions. Their task is to increase awarness of the huge gender gap that still exists and show that Hong Kong as a whole can only benefit by placing men and women on an equal footing.â&#x20AC;&#x201A;

Bonnie Chiu, a 24 year-old a former participant in HKFYG programmes, is the Founder and CEO of social enterprise, Lensational. One of its goals is to challenge the stereotyping of women. More details lensational.org/