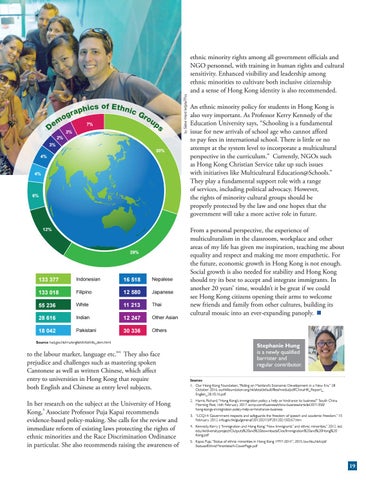 to the labour market, language etc.” They also face prejudice and challenges such as mastering spoken Cantonese as well as written Chinese, which affect entry to universities in Hong Kong that require both English and Chinese as entry level subjects. 4

In her research on the subject at the University of Hong Kong,5 Associate Professor Puja Kapai recommends evidence-based policy-making. She calls for the review and immediate reform of existing laws protecting the rights of ethnic minorities and the Race Discrimination Ordinance in particular. She also recommends raising the awareness of

ethnic minority rights among all government officials and NGO personnel, with training in human rights and cultural sensitivity. Enhanced visibility and leadership among ethnic minorities to cultivate both inclusive citizenship and a sense of Hong Kong identity is also recommended. An ethnic minority policy for students in Hong Kong is also very important. As Professor Kerry Kennedy of the Education University says, “Schooling is a fundamental issue for new arrivals of school age who cannot afford to pay fees in international school. There is little or no attempt at the system level to incorporate a multicultural perspective in the curriculum.” Currently, NGOs such as Hong Kong Christian Service take up such issues with initiatives like Multicultural Education@Schools.” They play a fundamental support role with a range of services, including political advocacy. However, the rights of minority cultural groups should be properly protected by the law and one hopes that the government will take a more active role in future. From a personal perspective, the experience of multiculturalism in the classroom, workplace and other areas of my life has given me inspiration, teaching me about equality and respect and making me more empathetic. For the future, economic growth in Hong Kong is not enough. Social growth is also needed for stability and Hong Kong should try its best to accept and integrate immigrants. In another 20 years’ time, wouldn’t it be great if we could see Hong Kong citizens opening their arms to welcome new friends and family from other cultures, building its cultural mosaic into an ever-expanding panoply.