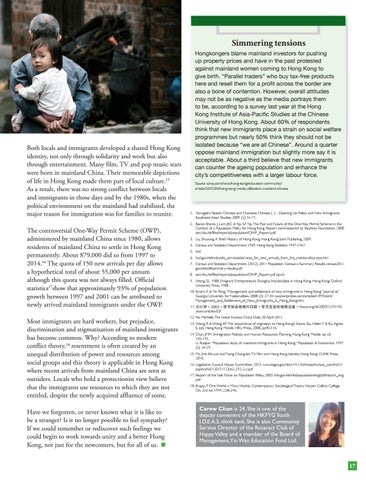 Both locals and immigrants developed a shared Hong Kong identity, not only through solidarity and work but also through entertainment. Many film, TV and pop music stars were born in mainland China. Their memorable depictions of life in Hong Kong made them part of local culture.15 As a result, there was no strong conflict between locals and immigrants in those days and by the 1980s, when the political environment on the mainland had stabilized, the major reason for immigration was for families to reunite. The controversial One-Way Permit Scheme (OWP), administered by mainland China since 1980, allows residents of mainland China to settle in Hong Kong permanently. About 879,000 did so from 1997 to 2014.16 The quota of 150 new arrivals per day allows a hypothetical total of about 55,000 per annum although this quota was not always filled. Official statistics17show that approximately 93% of population growth between 1997 and 2001 can be attributed to newly arrived mainland immigrants under the OWP. Most immigrants are hard workers, but prejudice, discrimination and stigmatization of mainland immigrants has become common. Why? According to modern conflict theory,18 resentment is often created by an unequal distribution of power and resources among social groups and this theory is applicable in Hong Kong where recent arrivals from mainland China are seen as outsiders. Locals who hold a protectionist view believe that the immigrants use resources to which they are not entitled, despite the newly acquired affluence of some. Have we forgotten, or never known what it is like to be a stranger? Is it no longer possible to feel sympathy? If we could remember or rediscover such feelings we could begin to work towards unity and a better Hong Kong, not just for the newcomers, but for all of us.

Hongkongers blame mainland investors for pushing up property prices and have in the past protested against mainland women coming to Hong Kong to give birth. “Parallel traders” who buy tax-free products here and resell them for a profit across the border are also a bone of contention. However, overall attitudes may not be as negative as the media portrays them to be, according to a survey last year at the Hong Kong Institute of Asia-Pacific Studies at the Chinese University of Hong Kong. About 60% of respondents think that new immigrants place a strain on social welfare programmes but nearly 50% think they should not be isolated because “we are all Chinese”. Around a quarter oppose mainland immigration but slightly more say it is acceptable. About a third believe that new immigrants can counter the ageing population and enhance the city’s competitiveness with a larger labour force. Source scmp.com/news/hong-kong/education-community/ article/2045204/hong-kong-media-vilification-mainland-chinese

Carew Chan is 24. She is one of the deputy conveners of the HKFYG Youth I.D.E.A.S. think tank. She is also Community Service Director of the Rotaract Club of Happy Valley and a member of the Board of Management,Yin Wan Education Fund Ltd.