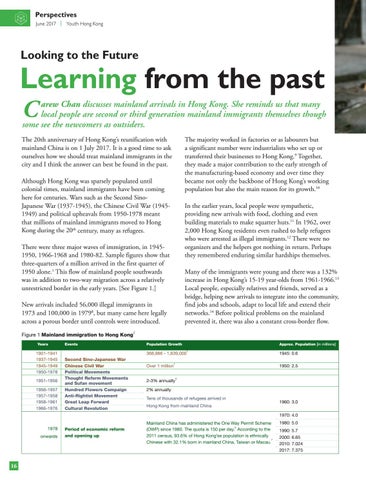 Learning from the past C

arew Chan discusses mainland arrivals in Hong Kong. She reminds us that many local people are second or third generation mainland immigrants themselves though some see the newcomers as outsiders.

The 20th anniversary of Hong Kong’s reunification with mainland China is on 1 July 2017. It is a good time to ask ourselves how we should treat mainland immigrants in the city and I think the answer can best be found in the past.

The majority worked in factories or as labourers but a significant number were industrialists who set up or transferred their businesses to Hong Kong.9 Together, they made a major contribution to the early strength of the manufacturing-based economy and over time they became not only the backbone of Hong Kong’s working population but also the main reason for its growth.10

Although Hong Kong was sparsely populated until colonial times, mainland immigrants have been coming here for centuries. Wars such as the Second SinoJapanese War (1937-1945), the Chinese Civil War (19451949) and political upheavals from 1950-1978 meant that millions of mainland immigrants moved to Hong Kong during the 20th century, many as refugees.

In the earlier years, local people were sympathetic, providing new arrivals with food, clothing and even building materials to make squatter huts.11 In 1962, over 2,000 Hong Kong residents even rushed to help refugees who were arrested as illegal immigrants.12 There were no organizers and the helpers got nothing in return. Perhaps they remembered enduring similar hardships themselves.

There were three major waves of immigration, in 19451950, 1966-1968 and 1980-82. Sample figures show that three-quarters of a million arrived in the first quarter of 1950 alone.1 This flow of mainland people southwards was in addition to two-way migration across a relatively unrestricted border in the early years. [See Figure 1.]

Many of the immigrants were young and there was a 132% increase in Hong Kong’s 15-19 year-olds from 1961-1966.13 Local people, especially relatives and friends, served as a bridge, helping new arrivals to integrate into the community, find jobs and schools, adapt to local life and extend their networks.14 Before political problems on the mainland prevented it, there was also a constant cross-border flow.

Period of economic reform and opening up

Mainland China has administered the One Way Permit Scheme 6 (OWP) since 1980. The quota is 150 per day. According to the 2011 census, 93.6% of Hong Kong’se population is ethnically 7 Chinese with 32.1% born in mainland China, Taiwan or Macau.