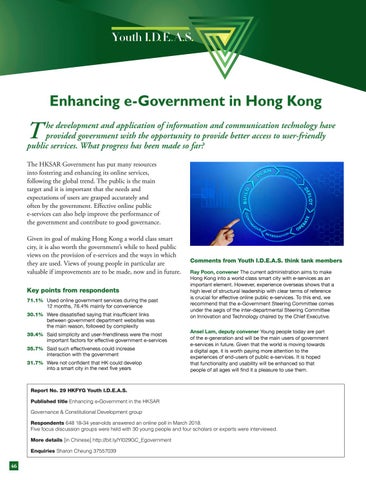 he development and application of information and communication technology have provided government with the opportunity to provide better access to user-friendly public services. What progress has been made so far? The HKSAR Government has put many resources into fostering and enhancing its online services, following the global trend. The public is the main target and it is important that the needs and expectations of users are grasped accurately and often by the government. Effective online public e-services can also help improve the performance of the government and contribute to good governance. Given its goal of making Hong Kong a world class smart city, it is also worth the governmentâ&#x20AC;&#x2122;s while to heed public views on the provision of e-services and the ways in which they are used. Views of young people in particular are valuable if improvements are to be made, now and in future. Key points from respondents 71.1% Used online government services during the past 12 months, 76.4% mainly for convenience 30.1% Were dissatisfied saying that insufficient links between government department websites was the main reason, followed by complexity 39.4% Said simplicity and user-friendliness were the most important factors for effective government e-services 35.7% Said such effectiveness could increase interaction with the government 31.7% Were not confident that HK could develop into a smart city in the next five years

Comments from Youth I.D.E.A.S. think tank members Ray Poon, convener The current administration aims to make Hong Kong into a world class smart city with e-services as an important element. However, experience overseas shows that a high level of structural leadership with clear terms of reference is crucial for effective online public e-services. To this end, we recommend that the e-Government Steering Committee comes under the aegis of the inter-departmental Steering Committee on Innovation and Technology chaired by the Chief Executive. Ansel Lam, deputy convener Young people today are part of the e-generation and will be the main users of government e-services in future. Given that the world is moving towards a digital age, it is worth paying more attention to the experiences of end-users of public e-services. It is hoped that functionality and usability will be enhanced so that people of all ages will find it a pleasure to use them.