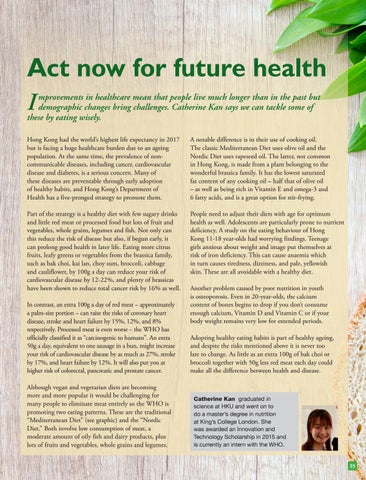 Act now for future health I

mprovements in healthcare mean that people live much longer than in the past but demographic changes bring challenges. Catherine Kan says we can tackle some of these by eating wisely. Hong Kong had the world’s highest life expectancy in 2017 but is facing a huge healthcare burden due to an ageing population. At the same time, the prevalence of noncommunicable diseases, including cancer, cardiovascular disease and diabetes, is a serious concern. Many of these diseases are preventable through early adoption of healthy habits, and Hong Kong’s Department of Health has a five-pronged strategy to promote them.

A notable difference is in their use of cooking oil. The classic Mediterranean Diet uses olive oil and the Nordic Diet uses rapeseed oil. The latter, not common in Hong Kong, is made from a plant belonging to the wonderful brassica family. It has the lowest saturated fat content of any cooking oil – half that of olive oil – as well as being rich in Vitamin E and omega-3 and 6 fatty acids, and is a great option for stir-frying.

Part of the strategy is a healthy diet with few sugary drinks and little red meat or processed food but lots of fruit and vegetables, whole grains, legumes and fish. Not only can this reduce the risk of disease but also, if begun early, it can prolong good health in later life. Eating more citrus fruits, leafy greens or vegetables from the brassica family, such as bak choi, kai lan, choy sum, broccoli, cabbage and cauliflower, by 100g a day can reduce your risk of cardiovascular disease by 12-22%, and plenty of brassicas have been shown to reduce total cancer risk by 16% as well.

People need to adjust their diets with age for optimum health as well. Adolescents are particularly prone to nutrient deficiency. A study on the eating behaviour of Hong Kong 11-18 year-olds had worrying findings. Teenage girls anxious about weight and image put themselves at risk of iron deficiency. This can cause anaemia which in turn causes tiredness, dizziness, and pale, yellowish skin. These are all avoidable with a healthy diet.

In contrast, an extra 100g a day of red meat − approximately a palm-size portion − can raise the risks of coronary heart disease, stroke and heart failure by 15%, 12%, and 8% respectively. Processed meat is even worse − the WHO has officially classified it as “carcinogenic to humans”. An extra 50g a day, equivalent to one sausage in a bun, might increase your risk of cardiovascular disease by as much as 27%, stroke by 17%, and heart failure by 12%. It will also put you at higher risk of colorectal, pancreatic and prostate cancer. Although vegan and vegetarian diets are becoming more and more popular it would be challenging for many people to eliminate meat entirely so the WHO is promoting two eating patterns. These are the traditional “Mediterranean Diet” (see graphic) and the “Nordic Diet.” Both involve low consumption of meat, a moderate amount of oily fish and dairy products, plus lots of fruits and vegetables, whole grains and legumes.

Another problem caused by poor nutrition in youth is osteoporosis. Even in 20-year-olds, the calcium content of bones begins to drop if you don’t consume enough calcium, Vitamin D and Vitamin C or if your body weight remains very low for extended periods. Adopting healthy eating habits is part of healthy ageing, and despite the risks mentioned above it is never too late to change. As little as an extra 100g of bak choi or broccoli together with 50g less red meat each day could make all the difference between health and disease.

Catherine Kan graduated in science at HKU and went on to do a master’s degree in nutrition at King’s College London. She was awarded an Innovation and Technology Scholarship in 2015 and is currently an intern with the WHO.