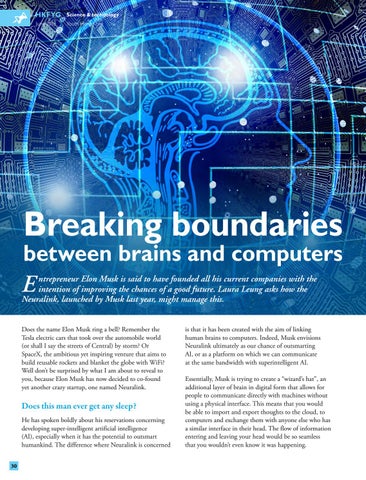 between brains and computers E

ntrepreneur Elon Musk is said to have founded all his current companies with the intention of improving the chances of a good future. Laura Leung asks how the Neuralink, launched by Musk last year, might manage this. Does the name Elon Musk ring a bell? Remember the Tesla electric cars that took over the automobile world (or shall I say the streets of Central) by storm? Or SpaceX, the ambitious yet inspiring venture that aims to build reusable rockets and blanket the globe with WiFi? Well don’t be surprised by what I am about to reveal to you, because Elon Musk has now decided to co-found yet another crazy startup, one named Neuralink.

Does this man ever get any sleep? He has spoken boldly about his reservations concerning developing super-intelligent artificial intelligence (AI), especially when it has the potential to outsmart humankind. The difference where Neuralink is concerned 30

is that it has been created with the aim of linking human brains to computers. Indeed, Musk envisions Neuralink ultimately as our chance of outsmarting AI, or as a platform on which we can communicate at the same bandwidth with superintelligent AI. Essentially, Musk is trying to create a “wizard’s hat”, an additional layer of brain in digital form that allows for people to communicate directly with machines without using a physical interface. This means that you would be able to import and export thoughts to the cloud, to computers and exchange them with anyone else who has a similar interface in their head. The flow of information entering and leaving your head would be so seamless that you wouldn’t even know it was happening.