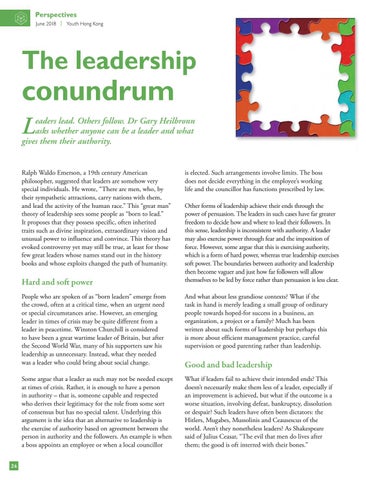 eaders lead. Others follow. Dr Gary Heilbronn asks whether anyone can be a leader and what gives them their authority.

Ralph Waldo Emerson, a 19th century American philosopher, suggested that leaders are somehow very special individuals. He wrote, “There are men, who, by their sympathetic attractions, carry nations with them, and lead the activity of the human race.” This “great man” theory of leadership sees some people as “born to lead.” It proposes that they possess specific, often inherited traits such as divine inspiration, extraordinary vision and unusual power to influence and convince. This theory has evoked controversy yet may still be true, at least for those few great leaders whose names stand out in the history books and whose exploits changed the path of humanity.

Hard and soft power People who are spoken of as “born leaders” emerge from the crowd, often at a critical time, when an urgent need or special circumstances arise. However, an emerging leader in times of crisis may be quite different from a leader in peacetime. Winston Churchill is considered to have been a great wartime leader of Britain, but after the Second World War, many of his supporters saw his leadership as unnecessary. Instead, what they needed was a leader who could bring about social change. Some argue that a leader as such may not be needed except at times of crisis. Rather, it is enough to have a person in authority – that is, someone capable and respected who derives their legitimacy for the role from some sort of consensus but has no special talent. Underlying this argument is the idea that an alternative to leadership is the exercise of authority based on agreement between the person in authority and the followers. An example is when a boss appoints an employee or when a local councillor 24

is elected. Such arrangements involve limits. The boss does not decide everything in the employee’s working life and the councillor has functions prescribed by law. Other forms of leadership achieve their ends through the power of persuasion. The leaders in such cases have far greater freedom to decide how and where to lead their followers. In this sense, leadership is inconsistent with authority. A leader may also exercise power through fear and the imposition of force. However, some argue that this is exercising authority, which is a form of hard power, whereas true leadership exercises soft power. The boundaries between authority and leadership then become vaguer and just how far followers will allow themselves to be led by force rather than persuasion is less clear. And what about less grandiose contexts? What if the task in hand is merely leading a small group of ordinary people towards hoped-for success in a business, an organization, a project or a family? Much has been written about such forms of leadership but perhaps this is more about efficient management practice, careful supervision or good parenting rather than leadership.

Good and bad leadership What if leaders fail to achieve their intended ends? This doesn’t necessarily make them less of a leader, especially if an improvement is achieved, but what if the outcome is a worse situation, involving defeat, bankruptcy, dissolution or despair? Such leaders have often been dictators: the Hitlers, Mugabes, Mussolinis and Ceausescus of the world. Aren’t they nonetheless leaders? As Shakespeare said of Julius Ceasar, “The evil that men do lives after them; the good is oft interred with their bones.”