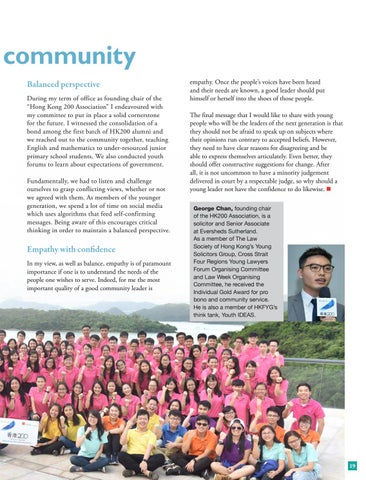 community Balanced perspective During my term of office as founding chair of the “Hong Kong 200 Association” I endeavoured with my committee to put in place a solid cornerstone for the future. I witnessed the consolidation of a bond among the first batch of HK200 alumni and we reached out to the community together, teaching English and mathematics to under-resourced junior primary school students. We also conducted youth forums to learn about expectations of government. Fundamentally, we had to listen and challenge ourselves to grasp conflicting views, whether or not we agreed with them. As members of the younger generation, we spend a lot of time on social media which uses algorithms that feed self-confirming messages. Being aware of this encourages critical thinking in order to maintain a balanced perspective.

Empathy with confidence In my view, as well as balance, empathy is of paramount importance if one is to understand the needs of the people one wishes to serve. Indeed, for me the most important quality of a good community leader is

empathy. Once the people’s voices have been heard and their needs are known, a good leader should put himself or herself into the shoes of those people. The final message that I would like to share with young people who will be the leaders of the next generation is that they should not be afraid to speak up on subjects where their opinions run contrary to accepted beliefs. However, they need to have clear reasons for disagreeing and be able to express themselves articulately. Even better, they should offer constructive suggestions for change. After all, it is not uncommon to have a minority judgement delivered in court by a respectable judge, so why should a young leader not have the confidence to do likewise. George Chan, founding chair of the HK200 Association, is a solicitor and Senior Associate at Eversheds Sutherland. As a member of The Law Society of Hong Kong’s Young Solicitors Group, Cross Strait Four Regions Young Lawyers Forum Organising Committee and Law Week Organising Committee, he received the Individual Gold Award for pro bono and community service. He is also a member of HKFYG’s think tank, Youth IDEAS.